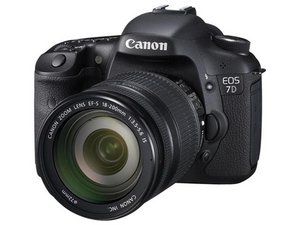 Why will the camera not turn on when lens is attached?

My 7d seems to be completely dead. I decided to take it to my local camera store. Before I left home though, I gave it another go by switching out different batteries - and nothing, so I removed the lens. Once I got to the store, I realized I had left the battery out. The salesman put a battery in and voila, it turned on. I couldn't believe it. He said it could be an old battery, but I told him I tried three different batteries. Then he decided to add a lens, and then it would not turn on. He tried to blow out little particles he saw where the lens attaches, changed the other little battery, but nothing worked. He said he had never seen anything like it in his 20 years. I've searched online, but cannot find anything pertaining to this issue. My camera is around four years old.