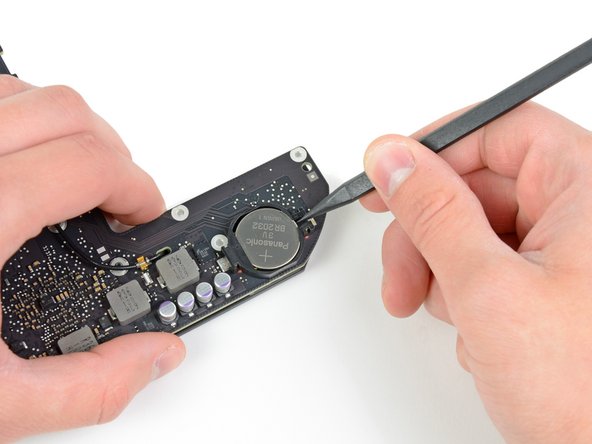 Use this guide to replace your mini's PRAM battery.

Great directions. Unfortunately it’s the logic board. But thanks.

Second time I have used this guide. Thorough and NO fluff…i.e. When the guide says “gently" or “can be difficult" those words are there for a reason. This one is direct and to the point without a head in the clouds. Leave that to me!

The PRAM battery is a commonly available BR2032 coin-cell.

By mail order only and from China for me, Ordered two BR2032 coin cells 12 days ago and still waiting. I doubt if you would find this exact type anywhere locally in a store. You could go with a CR2032 which is found more easily but after what I found online it does make a difference.

The main difference between these two types resides in their electrode.

While similar, the BR2032 uses carbon monofluoride as the positive electrode.

The CR2032 uses manganese dioxide for the positive electrode

There is a difference between CR2032 and BR2032. While the dimensions are the same, the chemistries are different. The BR2032 are preferred for maintaining computer PRAM or BIOS because at temperatures above 60c (140f) the CR type battery decays faster and has more voltage sag. It is not unusual for the inside of your computer to reach these temperatures. In relatively speaking higher drain applications -like many consumer use applications, the chemistry of the CR type battery is advantageous as it provides more steady voltage under higher drains at temperatures under 60c. In short, after 3 or 4 years in a system the CR chemistry battery might not be providing close enough to the 3v for the system clock to maintain the purest accuracy. But can you use either?- yes. But what does Apple put as factory original? - the BR chemistry.

Why is a fan listed as a part? Is it expected to be destroyed in removal? That seems unlikely.