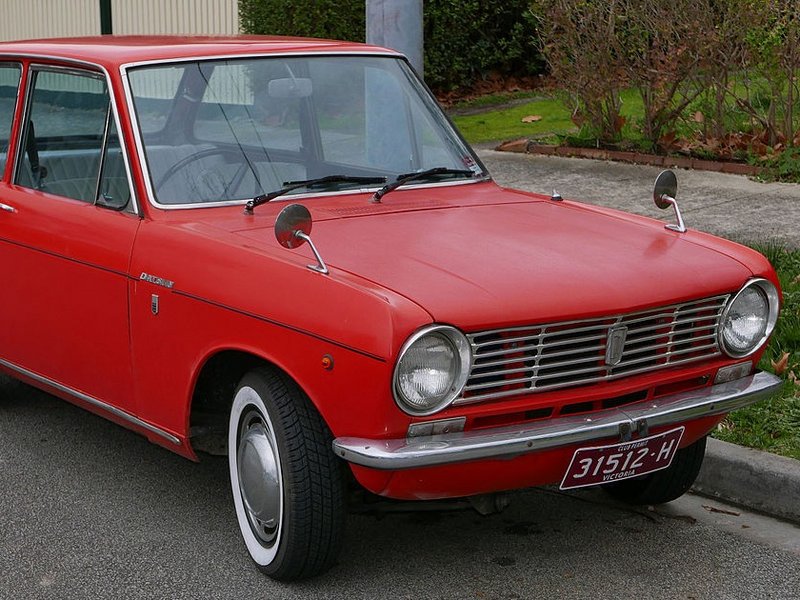 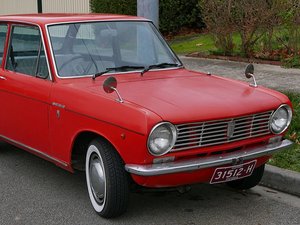 The first Datsun Sunny, exported as the Datsun 1000, was launched in September 1966 with two body styles, a two-door sedan (B10) and a van/station wagon (VB10). The Sunny was an all-new product built on a dedicated platform called the "B" series that benefited from Nissan's production of small cars since before the war and combined engineering efforts from newly acquired Aichi Manufacturing that met the goals set by Japan's Ministry of International Trade and Industry "national car" program. These were available in both a "Standard" and "Deluxe" version, featuring drum brakes, conventional leaf springs at the rear and wishbone type independent front end. The front end used a single transverse leaf spring. In Japan the car was sold at a dealership sales channel established just for the Sunny, called Nissan Satio Store. The Sunny was introduced in the same year as the Toyota Corolla and Subaru 1000.

In December 1965, Nissan held a national campaign in Japan to name its newest product in a mail-in ballot, and after receiving over eight million submissions, the name Sunny was chosen after having been suggested 3,105 times and was announced on 19 February 1966 by Yoshisuke Ayukawa, Nissan Motors founder.

The car featured a four-cylinder in-line engine, the A10, with a total displacement of 988 cc and a four-speed gearbox. The 1968 model, introduced in October 1967, added to the lineup the four-door sedan (B10) in both DeLuxe and Standard form. February 1968 saw the release of the new coupé (KB10). ^^^^Marketed as the "Sunny Coupé" in Japan, it was available in a wide variety of levels from "Standard", to "GL" (Grand Luxe). The range of factory options and accessories was by this time vast. Total horsepower in the 1968 model was claimed to be 62 hp (46 kW) at 6,000 rpm. The engine displacement was kept below 1.0-litre to keep it in the lowest Japanese road tax bracket and encourage sales.