Learn what a tape drive is, and what tape drives are used for.

Consumer-grade tape drives have always lagged behind hard drives in capacity, and that gap remains today. The highest-capacity consumer-grade tape drives, Travan 40 models, store only 20 GB natively, although they are advertised as storing 40 GB with compression. (Realistically, you can expect to store about 30 GB on a "40 GB" tape, less for incompressible data, such as image files.) Consumer-grade tape drives use the ATA or USB 2.0 interface so even the internal models are as easy to install as an optical drive but they require many hours to write and verify a tape. Also, tapes are quite expensive, at $30 to $40 each, which translates to a media cost of $1/GB or more. Figure 9-6 and Figure 9-7 show Certance Travan 40 tape drives, internal and external models, respectively. 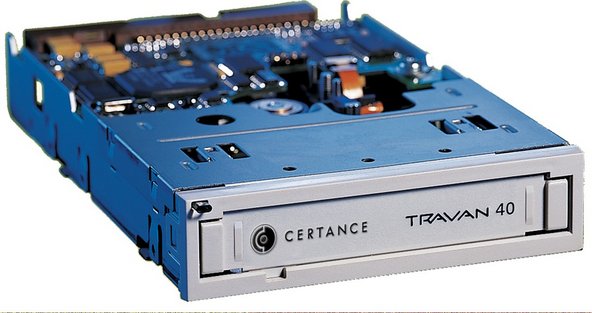 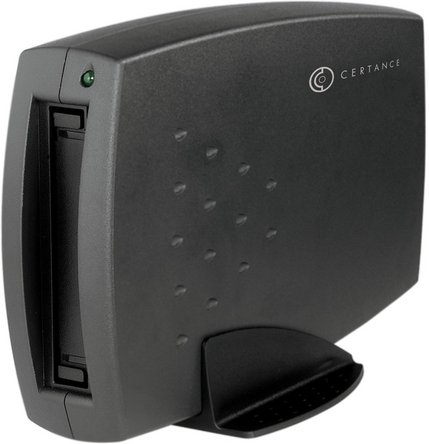 If you are considering buying a tape drive or if you currently use one for backup consider the following:

Over the years, many companies have tried and failed miserably to develop a market for proprietary external or removable storage systems. The most successful of the bunch the Iomega ZIP and Jaz drives were never more than niche products, and are now merely footnotes in computer history. Other products, such as the LS-120 highcapacity floppy drive and cartridge-based storage systems from SyQuest, Castlewood, and others, sold in small numbers and are long obsolete.The problem with most of these products was that their makers attempted to use the King Gillette scheme of giving away the razor and selling the blades. Accordingly, these companies sold their drives at a low price often below their cost expecting to recoup their investment by selling lots of high-profit disk cartridges. Alas, users never bought as many disk cartridges as the manufacturers thought they would, so, with the exception of Iomega, most of these companies have disappeared.If you are still using one of these obsolete drives, do yourself a favor. Get your data off the proprietary disk cartridges while you still can and write it to your hard drive or optical discs. Then, do a favor for a stranger. Sell the drive on eBay so that someone else who has a nonfunctioning drive and a bunch of disks can salvage his data.

ONE CENT PER GIGABYTE?

The cost/capacity equation will change as high-capacity Blu-Ray and HD-DVD writers become mainstream products, which we don't expect to occur until at least mid-2007. Although Blu-Ray and HD-DVD drives and discs will be very expensive initially, we expect eventually to see 50 GB writable optical discs selling for $0.50 apiece. Of course, by that time we'll probably all have a terabyte or more of hard disk storage in our systems.

For the same cost as a consumer-grade tape drive and enough tapes to implement a reasonable rotation, you can buy three or four external hard drives that are specifically designed for backing up. These drives sold by Seagate, Maxtor, Western Digital, Fantom, and others include backup software such as Dantz Retrospect, which allows you to back up your system by pressing one button. The size of your backup set is limited only by the total capacity of the external hard drive, and multiple backup sets can be written to the drive until its capacity is reached.