Learn what a TV tuner card is, and what it does.

These cards tune a television signal and capture it for recording to disk, but do not provide standard video adapter functions. Installing one of these cards with appropriate software allows your PC to function like TiVo or another PVR/DVR (personal video recorder/digital video recorder). Hauppauge (http://www.hauppauge.com) is the best-known vendor of such cards, with their various WinTV-PVR models.

These cards combine TV tuner/capture functions with standard PC video adapter functions. ATI dominates this market segment with its RADEON All-In-Wonder (AIW) series cards. These cards are optimized for use with ATI's MultiMedia Center software, which provides PVR/DVR functions as well as other multimedia features.

The plethora of functions supported by these cards means that card bracket real estate is at a premium, as shown in Figure 10-9. This model, an ATI AIW 9800 Pro AGP card provides, from left to right, a purple Video-In connector, a standard RF-In F-connector, a black Video-Out connector, and a standard DVI-I computer video connector. Some models don't even attempt to fit all the necessary connectors on the card bracket. Instead, they provide a proprietary connector that links to an external break-out box, usually called an octopus connector. 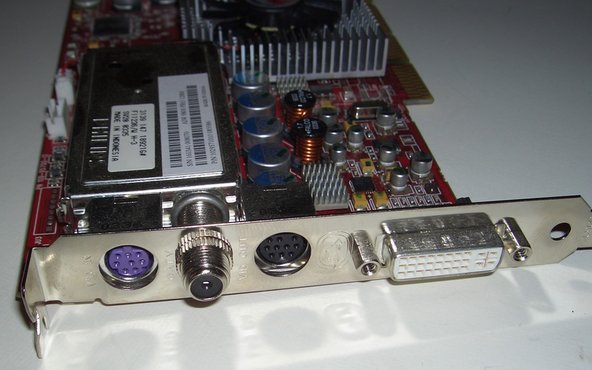 Which, if any, of these cards makes sense for you depends on your priorities and habits. If you primarily time-shift TV programs, a $99 DVD recorder is probably a better choice than a TV tuner/capture card. These devices are essentially VCR replacements that record directly to writable DVD discs rather than VHS tapes. More expensive models include a hard drive that can store many hours of programming.

If you want more than a simple VCR replacement and you dislike, as we do, TiVo policies and practices (not to mention their high fees), installing a TV tuner/capture card in your primary PC or a secondary PC is a good alternative. If you prefer to use Windows, we recommend an ATI AIW card used with their bundled MultiMedia Center software. If you want more flexibility and are willing to learn a bit about Linux, we recommend a Hauppauge PVR-250 or PVR-350 card or cards; you can install multiple tuner cards if you want to record multiple programs simultaneously on a Linux box running MythTV (http://www.mythtv.org).