Learn about external hard drive options for your PC.

External hard drives may use any of three interfaces:

USB 2.0 is by far the most common interface supported by external hard drives. USB 2.0 nominally provides 60 MB/s bandwidth, but overhead typically reduces this to an effective 25 MB/s to 30 MB/s. Because standard hard drives can use 50 MB/s or more bandwidth, the USB 2.0 interface throttles throughput noticeably for the fastest external hard drives, making them "feel" somewhat slower than an internal drive. The advantage of USB 2.0 is that it is ubiquitous, so a USB 2.0 external hard drive can be connected to nearly any notebook or desktop system.

FireWire (IEEE-1394a or IEEE-1394b) is similar functionally to USB 2.0, but faster in real terms. Most FireWire external hard drives use IEEE-1394a S400, which provides nominal bandwidth of about 400 Mb/s, or 50 MB/s. True throughput is somewhat smaller, but sufficient to make throttling relatively minor. Most IEEE-1394b external hard drives support the S800 data rate, which eliminates throttling completely. The disadvantage of FireWire is that relatively few systems, notebook or desktop, provide an S400 FireWire interface port, and almost none provide an S800 port. Few FireWire-only external hard drives are available. Most drives that support FireWire also include a USB 2.0 interface. If you plan to use a small FireWire drive with your notebook computer, you'll probably want bus power. Not all FireWire ports deliver bus power.

External SATA (eSATA) is the least common interface supported by external hard drives, but is fast gaining popularity. eSATA provides 150 MB/s or 300 MB/s bandwidth, and the high efficiency of the eSATA protocol means that nearly all of that bandwidth is actually available to the drive. An eSATA external hard drive has the same performance as the same drive used internally. The disadvantage of eSATA is that only a tiny percentage of systems have eSATA ports.

eSATA AFTER THE FACT

You can add eSATA support to an existing system by installing an eSATA host bus adapter in a desktop system or by using a Cardbus or ExpressCard eSATA card in a notebook. For desktop systems, you can instead use an inexpensive adapter that connects to an internal standard SATA port and provides an eSATA port on an expansion card bracket.

You can also go into Device Manager, open up Properties for the drive, choose Policies, and select Optimize for Quick Removal. It claims you can yank the drive out without dismounting, but, well it's Windows.

Drawing power from the interface doesn't always work with USB 2.0, since it delivers less power than FireWire. I tested this with four different 2.5" drives, and looked into the power consumption issue. In theory, there is enough juice coming via USB 2.0 to run the drive, but not enough for the spinup.

There are two kludges that enclosure makers push, and both of them stink. The first is the USB Y adapter: you plug one end into your drive, and the other two ends into two separate USB ports. It rarely works, as it's not unusual to find that both USB ports are on a single USB root hub, and are sharing the voltage.

The other kludge is to include a small rechargeable battery in the enclosure. Surprisingly, this works pretty well, because the drive really only needs the extra power in short bursts. But it still freaks me out; the consequences of the battery draining in the field are unacceptable.

The only reliable solution for USB bus power I've found is 1.8" drives. Even Seagate claims that only one line of their 2.5" drives will run via USB power, and that's "in the majority of systems": http://www.seagate.com/docs/pdf/whitepap....

Broadly speaking, there are three categories of external hard drive: 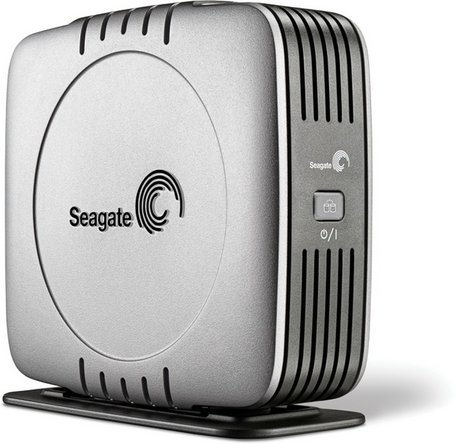 Portable external hard drives are smaller than a paperback book, and about an inch thick. Because they use 4200 RPM 2.5" notebook hard drives, these drives have smaller capacities typically 40 GB to 120 GB and lower disk performance than full-size models. Their low power consumption means they can be powered directly by the interface and so require no power brick. Most portable models are USB-only. Figure 9-2 shows a 120 GB Seagate portable external hard drive, a typical model. 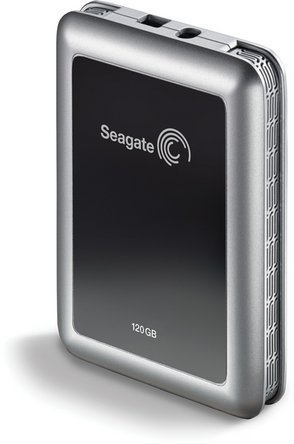 Pocket external hard drives are a solution in search of a problem. Because they use 3600 RPM 1" hard drives, these models have tiny capacities typically 5 GB or less and much lower disk performance than even portable models. We see no point to buying one of these drives. USB flash drives, described later in this section, are smaller, faster, cheaper, and hold more data. Figure 9-3 shows a 5 GB Seagate pocket external hard drive, a typical model. (Note that models based on 1.8" hard drives have substantially higher capacities, are much less expensive per gigabyte than USB flash drives, and are often small enough to qualify as "pocket" drives.) 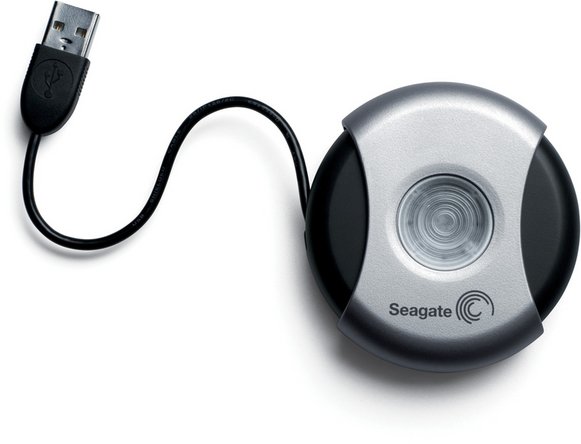 External hard drives of various types are made by Iomega, Maxtor, Seagate, Western Digital, and other companies. We prefer the Seagate models.

Don't overlook the advantages of a Network Attached Storage (NAS) device, also called a Network Hard Drive. These devices resemble standard external hard drives, but instead of connecting to a PC via USB or FireWire to provide local storage on that PC, they connect directly to your network with an Ethernet cable, providing storage that is accessible to any PC on the network. NAS devices are made by Maxtor, Western Digital, D-Link, NETGEAR, Buffalo, and many other manufacturers.

This could use some updating. The last three external drives I purchased used USB 3.0 ports.