Learn what a sound card is, and how it works.

Standalone sound cards are a dying category, killed by the ubiquity and high quality of integrated audio. Of the many companies that formerly specialized in sound cards, only Creative Labs, M-AUDIO, and Voyetra/Turtle Beach retain a significant retail market presence. 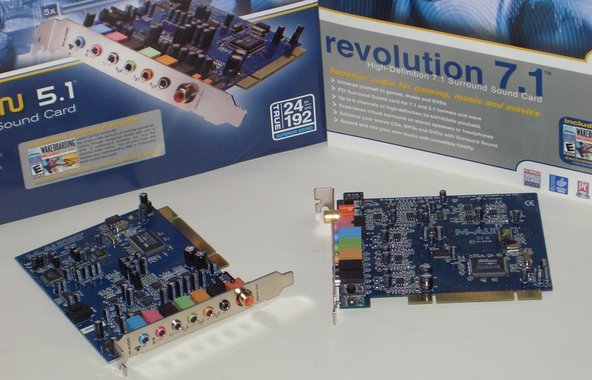 The general consensus, with which we agree, is that Creative Labs sound cards are excellent for gaming, but don't have the best sound quality. Conversely, M-AUDIO sound cards have superb sound quality, but have slightly inferior gaming support. Accordingly, if you're a dedicated gamer, we recommend using a Creative Labs model. If you're an audiophile, go with an M-AUDIO model. If you're a gamer and an audiophile, pick one. You won't be disappointed in either.

The key function of an audio adapter is playback accepting a digital data stream from the PC and converting it to an analog audio signal that can be reproduced on speakers or headphones. Most audio adapters can also do the converse accept an analog audio signal and convert it to a digital data stream that can be stored on a PC. Audio adapters use the following components to provide these functions:

Audio adapters contain at least one Digital-to-Analog Converter (DAC) and one Analog-to-Digital Converter (ADC) for each of the two stereo channels, and at least one DAC for each additional audio channel. (Many audio adapters can output 5, 6, 7, or 8 channels, but few can record more than two-channel stereo sound.) A DAC converts a digital audio stream into the analog audio delivered to the Line-out port. An ADC digitizes analog sound received from the Line-in or Microphone port. CD-Audio sound, generally the highest quality supported by audio adapters, requires 16-bit resolution. The converters used in better-quality audio adapters usually support higher resolution, typically 18- or 20-bit. Some expensive cards use 24-bit or higher resolution for both recording and playback. Resolution some times differs between the DAC and ADC. For example, a card might use an18-bit DAC and a 20-bit ADC. Internal resolution is often higher than that supported by the DAC/ADC, typically 24- or 32-bit.

Sampling is the process by which a continuously varying analog source, such as an audio stream, is converted to discrete digital data. Sampling takes "snapshots" of the analog source stream and digitizes them to represent the whole. Resolution specifies the amount of data captured in each snapshot, specified in bits, which may also be referred to as sample size. A larger sample size captures more data about the audio stream, and results in higher fidelity. Sampling rate specifies how often samples are captured, and is specified in hertz (Hz) or kilohertz (KHz). A faster sampling rate captures more data and also results in higher fidelity. CD-DA audio is sampled in stereo with16-bit resolution at 44,100 Hz. Voice-only sampling is often done at much lower resolution and sampling rates; for example, a mono 8-bit8,000 Hz sample, results in much smaller digital file sizes.

The processor (also called the sound generator or synthesis engine)performs general audio processing tasks and creates analog output from MIDI input by reading, interpolating, and combining wavetable samples into the composite audio waveform represented by the MIDI instructions. Most audio adapters use a custom digital signal processor (DSP) like the E-mu Systems EMU10K1 or EMU10K2, or the Crystal/Cirrus Logic CS4630 or CS8420. The processor used directly or indirectly determines several key capabilities of the audio adapter, including how many MIDI channels, voices, hardware-accelerated sound streams, and so on it supports. DSPs provide useful supplementary capabilities in hardware, such as reverb and chorus effects, text-to-speech processing, and compression. Because a DSP is programmable, some DSP-based audio adapters support related functions, such as fax modem or telephone answering machine functions.

Line-out is a line-level (unamplified) stereo output intended to be connected to line-in on amplified speakers, headphones, home audio equipment, or a recorder. Most audio adapters provide one stereo Line-out port, but some provide two mono Line-out ports, designated left and right. Audio adapters that support four speakers usually have two stereo Line-out ports, one each for front and rear speakers. Audio adapters that support surround sound may provide three or four Line-out connectors to support six or eight speakers. The standard color code for Line-out is lime, although for this and other color codes makers often pay scant attention to the exact hue. The standard icon usually stamped into the card bracket is three concentric circle segments (to represent audio vibrations) with an outward-pointing arrow anchored in the center.

Microphone-in, sometimes labeled Mic, is a monaural input that supports in expensive microphones for recording voice. The standard color is pink, although red is commonly used, and the standard icon resembles a microphone.

The only microphones that should be attached directly to a Line-in connector are the ones with integral preamplifiers. Generally, if your microphone needs a battery, it connects to Line-in; otherwise it goes to "mic."

Subwoofer is a line-level monaural output intended to be connected to a powered subwoofer, which may also be called an LFE (Low-Frequency Emitter). Standard color is orange.

Figure 12-2 shows the audio connectors on an M-AUDIO Revolution 7.1, which are typical for a premium sound card. From left to right are a coax S/PDIF jack, Microphone-in, and Line-in, followed by four Line-out jacks to connect the eight speakers supported by this card. 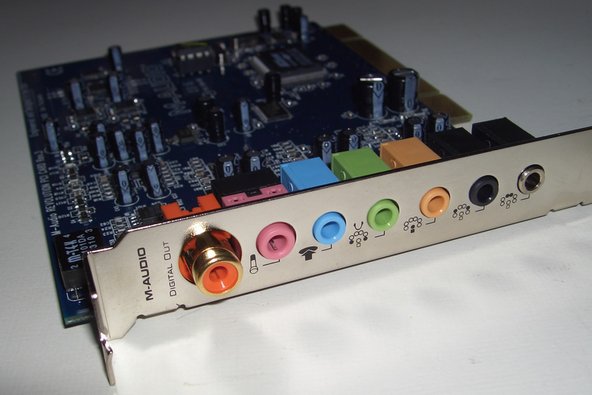