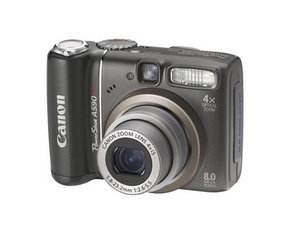 Canon Powershot A590 IS Troubleshooting

The Canon PowerShot A590 IS is an 8 megapixel digital point-and-shoot camera. It comes with a 4x optical zoom with an image stabilizer. Pictures are viewed on the large 2.5 inch LCD screen.

My Camera Will Not Turn On

When you press the on button the camera will not turn on.

First, verify that the batteries are installed correctly (or installed at all). 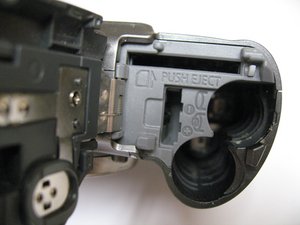 Solution: If this plastic tab is broken, then the button is probably not getting pressed. To fix this, you can superglue your own home made tab onto the hatch. A toothpick works well for this fix. 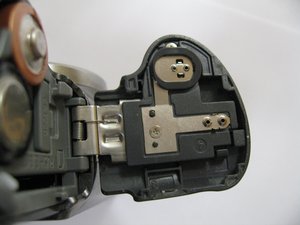 Another explanation for a non-operational camera is the battery contacts are dirty, or are not contacting the batteries whatsoever.

Solution: To fix this, clean the contacts on the underside of the battery hatch, close the hatch and see if the camera works. If the camera still doesn't work, then try putting something under the contacts to facilitate their contact with the batteries.

If all else fails, try to pull the -'ve connector right out of it's slot, to make a better connection between the connector and the batteries. See details at http://lakeuk.blogspot.com/2010/04/camar...

When you turn on the camera the lens does not work, or a lens error message appears on the screen.'Len is not going back to its place. It remains out.

One of the most common problems is that the camera batteries are low and don't have enough juice to extend the lens.

3) Insert the cameras Audio/Video (AV) cable, and turn the camera on. Inserting this cable ensures that the camera's LCD screen remains off during the start process. Because of this, extra battery power is available to the camera's lens motor during startup. This extra power can be useful in overcoming grit or sand particles that may be jamming the lens assembly.

Another problem is that sand, dust, or other grit have entered the camera and are preventing things from moving smoothly.

1) Use compressed air to blow in and around the lens barrel. This will hopefully remove whatever grit or particulate matter that is causing the jam.

Lens is Off Track

The worst case scenario would be that the lens assembly has become dislodged from its guide slots when it was dropped or when it experienced some other sort of trauma.

Solutions: There are a number of ways to attempt to re-seat the lens guide pins in their slots.

1) Place the camera flat on its back on a table, pointed at the ceiling. Press and hold the shutter button down while at the same time pressing the power-on button. The idea here is that the camera will try to auto-focus while the lens is extending, hopefully seating the lens barrel guide pins in their slots

2) Repeatedly hit (with moderate force) the side of the camera against the soft part of your palm. This could potentially knock the guide pins back into their slots. Be careful here, as knocking the camera too hard could damage/dislodge internal components.

3) If the lens assembly looks crooked, try wiggling it gently while it is extending. Listen for a 'click' noise, indicating that the guide pins have reset in their slots.

"No Memory Card" or a Similar Message

When you turn on the camera a "No Memory Card" or similar message appears on the screen.

If your memory card is locked, then remove the memory card from the camera. On one side of the card, there should be a switch that can be moved either backwards or forwards. If you receive the "memory card is locked" error message, then move this switch to the opposite side and see if the problem is fixed.

If there is no memory card installed, then you need to go to the store and buy one or order one online.

Either reformat your memory card, if possible, or go to the store and buy a card that will work for your camera. Memory cards are cheap, and available at a great variety of stores and online.

The camera lens is remaining extended it is not going in.

So here’s my problem; I have a Cannon Poershot A590IS that I love. I used to be able to remove the memory card, insert it into a part and insert that into the USB port on my P.C. The screen would then scan ALL pictures on the memory card, and allow me to “import” those that I wanted, and they would then be in the P.C. as a library for me. In the recent move that small device was lost., so I cannot download or “import” pics that become jpegs. Can I buy a new piece?

Camera flash does not work says battery fault but Batteries, are new where is fault