How I Got Here?

I’m a graduate of San José State University and I’m new to the iFixit team. I have been fixing/building things around me for a while, mostly to make my life easier and occasionally to save some money, but always with the idea that whatever I’m working on could last a little bit longer. Whether that was sewing a sweater, building a desk out of scrap wood, repairing my 5+ year old headphones, or just tinkering with my bike. I always do everything I can before I buy anything new. Earlier this year I noticed that some of the makers/fixers I follow online were using tools and parts from iFixit. After making my first purchase (the refurbished Pro Tech Toolkit), I quickly realized that iFixit was about more than just fixing and I wanted to be a part of it.

A Little Bit About me…

I’ve lived in San José with my little dog Blu for the last 8 years and consider it home. I enjoy reading, writing, and taking walks (Blu would rather go for car rides). I’m in the process of buulding my own bookshelves since there’s only so many piles of books I can continue to stack around my apartment without it looking like the stockroom of a bookstore. Unlike tsundoku though, the piles are comprised of books I’ve already read. I also enjoy binge watching series, especially Swedish crime shows and TV/film from the 90s and the aughts. My most used pieces of tech are my Game Boy (mostly for tetris), reMarkable Tablet, and Calibre. 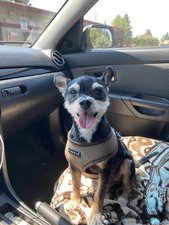