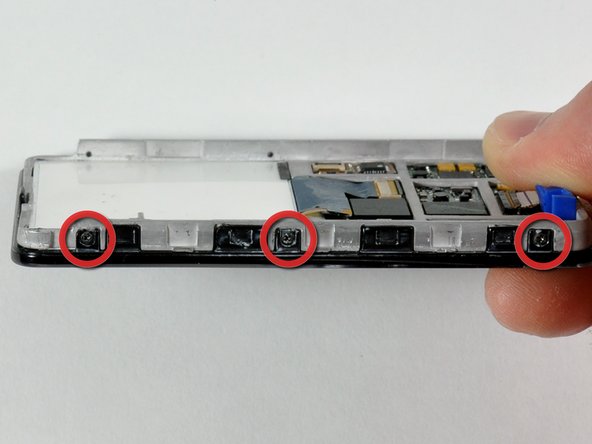 My roommate had a 30 GB Ipod Classic (5th gen.) with a cracked screen. The back panel was a bit bent up at the top by the hold button and it functioned without the back light on, so when he bought a new one with more memory I took his. It had other wear and tear, like scratches from regular use, so I decided to replace the front and back panels along with the screen.

This Ipod Classic was considerably easier to work on than the smaller nano I had worked on before. The back panel came off with relative ease when following the directions on the guide (not even 20 minutes), and all of the connections came apart easily all the way to the display (less than an hour total for the tear-down while being very careful). I don't have any pictures, but everything looked exactly like the guide. I reassembled everything all the way to putting on the back panel, and this is when I realized the battery was swollen up to the point where the I couldn't get the panels to clip together.

My friend is a swimmer, and he always listens to music before he races. He probably exposed his Ipod to enough moisture over time that his battery reacted to it and expanded, which in turn cracked the screen. So I ordered a new battery and it was at my house in a few days (ifixit--thank you for the best shipping around). The battery even came with new adhesive and fit properly in its space behind the screen. I have the Ipod plugged in right now charging, and everything functions perfectly. Easy.

Now all I need to do is get all of this Lil Wayne off of my new Ipod.

Order several pairs of the ipod removal tools (the plastic blue pry bars for taking the back panel off). They're cheap and make the process a lot easier. I used a micro flat-head screwdriver instead, but that was stupid and dangerous. The plastic is a lot less likely to ruin the delicate inner parts in the Ipod and won't scratch up its panel if you want to reuse it.

When taking out the small screws, I used a strip of tape stick them to so they wouldn't get lost. A magnetic bowl like mechanics use would be the best though. Just make sure you have some way to contain and keep track of them.

Next, I would say to get new front and back panels. When you take it apart the first time, it's very likely that the back panel gets bent up at least some and the front panel gets a few abrasions as well. They don't cost a whole lot, and it looks a lot nicer when you're finished. If it functions when you're done, you'll be really proud it.

Last, just be really careful with every step. Double check everything and make sure all of the connections are secure and in the right place. Don't force anything or all your work was for nothing.