Replacing the Logic Board on my 2010 Unibody MacBook Pro 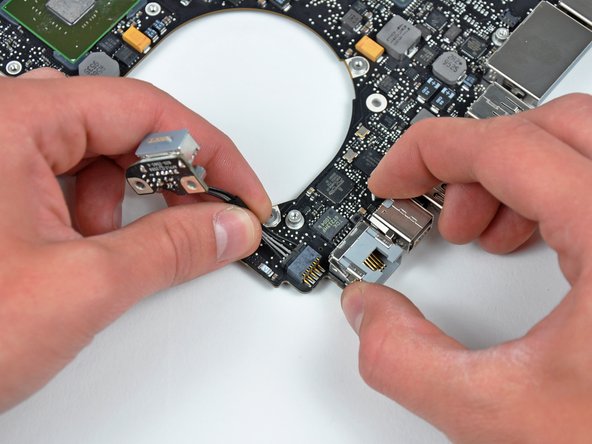 I wanted to replace the logic board because my NVIDIA GPU was no longer working. This meant that if I had automatic graphics switching on, the computer would continually have a kernel panic and reboot because the GPU wasn't;t working. This got so annoying to the point where I sometimes could not get anything done and I had to find free external software that would allow me to only use the intel chip, thus preventing kernel panics. The Logic Board was also 7 years old and in general had slowed down considerably.

The replacement of the logic board went very smoothly. I found it actually rather easy as long as I took my time and made sure I was as thorough as possible. When doing this repair I found that it is important to have some extra thermal paste as I needed it to reinstall the heat-sink. Also when installing the heatsink I used some specialized cleaner to get rid of the old thermal paste material and prepare the service for a new application of thermal paste. Once I had disassembled everything, it was fairly easy to put it all back together.

One thing that was actually more of a struggle for me than replacing the logic board itself, was getting the new logic board to boot up to my SSD. What I discovered is that because my computer was installed with the latest macOS (High Sierra) before I did the replacement, there was a problem with the new logic board being able to read the information off the SSD as it was configured to the new Apple File System (APPFS). What I had to do to fix this was first find an unused SSD, format it so that it could be recognized by the mac. Then I installed macOS Sierra on it as this uses that HFS+ file system, which the new logic board seemed to be able to read. Once that was done. I plugged the SSD into an external connector and booted my fixed MacBook Pro from the external drive (press "option" key when booting). Through doing this, I was then able to download macOS High Sierra to the external SSD and get the new logic board to recognize APFS. In a sense if felt like I had to train the logic board to read a new language. Once this was done and I rebooted the computer a few times on the external SSD I was ready to try booting into the SSD I had reinstalled in my computer. And it worked. I was finally able to boot into my existing SSD which was running APFS.

One thing I would highly recommend is that you keep multiple backups. Especially, some backups just before upgrading to High Sierra and some after. Also, if you plan on doing this repair I would potentially consider not upgrading to macOS High Sierra until after the repair. If may make things easier.

Another thing I want to mention is to make sure that you use a good thermal paste when reinstalling the heat-sink. Along with this reinstallation it doesn't hurt to pick up some thermal paste cleaner as this will ensure that when you reapply the new thermal paste and put on the heat-sink, both the heat-sink and logic board will be thoroughly clean enough to run as efficiently as possible.

Excellent! This described my problem and confirmed my suspicions. I’m about to give it a try.