Back to Gaming on the Wii U! 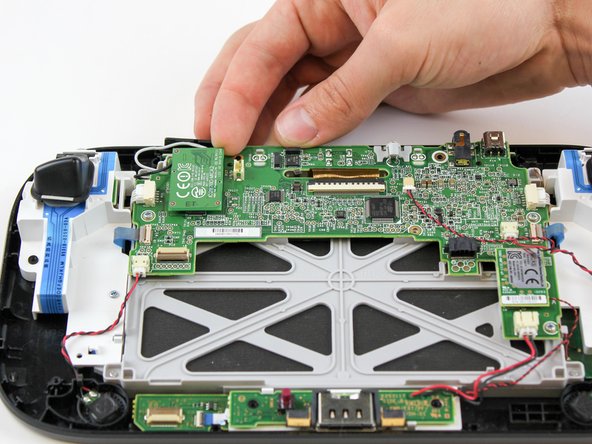 I purchased my Wii U used from GameStop. After setting it up, I quickly noticed that the GamePad would not communicate with the console unless I was sitting right in front of it, with the GamePad facing the console. I already had my Network ID linked to the console, and GameStop had no units to exchange it with. I'd have to wait until they had more in, and hopefully that would be within the exchange period. Further, I'd have to call Nintendo to transfer my ID to a new console, and it's possible a "new" console would have the same issue.

Searching online, it seemed like a somewhat common problem. I found this exact board online for 3 times the amount iFixit sold it for. They didn't have the support iFixit did, and it just made sense to go the DIY route with iFixit!

It was incredibly fast and smooth. The board was easy to access once you open the Wii U GamePad, and the hardest thing to do was get the screws out of the deeper holes towards the bottom of the GamePad. But after getting it all back together, it worked incredibly well, and I'm super happy.

First, you'll need a Triwing screwdriver. Nintendo uses this security bit in almost all of their consoles. You can find one cheaply online and get it sent to home. If you want it sooner, check your local Walmart. They had a screwdriver set for about $7 that included "Y bits." These are the EXACT ones you need, and work perfectly, plus you'll have an entire set of heads for the included screwdriver.

If you get this kit, you'll probably need something to get the driver head into the deeper holes. Toilet paper in the extension rod will do the trick. Just a small wad stuck in there will give the length needed to get those screws out. Some water afterwards will get the wad out rather easily.

Second, once you're totally done with the repair, you'll need to resync the GamePad with the Wii U. If you don't, it will seem as if the repair didn't work. Turn on the Wii U and wait for it to load, then push the Sync button on the front of the console, under the cover, then push the Sync button on the bottom of the GamePad. Enter the correct combination, and there you go!

Nintendo Wii U GamePad Wi-Fi Board