Will not boot past grey screen

My MacBook Pro boot to the Apple Logo with progress meter just fine. After a normal space of time it continues as though it is going to boot normally but instead of going to the blue screen or blue screen with the cursor arrow it goes to what I would call a white screen and just stays there without booting any farther.

I do not have the original install discs for this computer and even if I did have I wouldn't know how to best use them.

Can anyone help me?

As suggested, I tried the "First Aid" "Repair Disk" from another mac computer and when I re-installed the HDD in my MacBook Pro it does the same old thing. Any more suggestions?

I removed the hard drive and attached it to my Mac Pro A1186 tower using USB and it boots perfectly. I then attached it to my Mac Mini A1283 and it booted, no problem. I ran repair disk and permissions repair various times on the Mac Pro and re-installed it into the A1150 and obtained the same result (a light blue/white screen after the Apple Logo and progress monitor). I do have a factory retail install disks for 10.4 Tiger, 10.5 Leopard, and 10.6 Snow Leopard. The OS currently installed on the Hard Drive is OS X 10.6.8 Snow Leopard. Do you suggest that I try it with OS X 10.5.8 Leopard? I can very easily do so but I thought that the All50 should run Snow Leopard without any problem. I really hope that I don't have to revert all the way back to Tiger even though it's a good OS I prefer Leopard or Snow Leopard. I also tried it with a new Hard Drive with the same OS 10.6.8 installed and obtained the same result. Will a bad Logic Board give this kind of symptoms?

If the system will boot into Safe Mode functionally, it's possible that the damage is limited to your user account. Some user resource may be damaged, or you may have installed some software recently that's loading at startup and screwing something up.

One diagnostic trick is to log into safe mode, then create a new user account. Go into System Preferences>Accounts, create a new account with admin privileges, turn off automatic login (if it's on), then restart the computer and log into the new account and see if the symptoms persist. If not, then it's a problem with the user account.

Beg/borrow/steal a bootable drive (DVD or hard drive) to run disk repairs. You should always have a second bootable disk available to you, so you can fix your boot drive.

Once you get a usable external drive with 10.4.6 through 10.6.8 (either a bootable hard drive, or any bootable system install disc - retail or OEM, whether it's intended for your computer or not), boot from that drive. When you're fully booted to the finder or the system installer:

When that operation has finished, look to see what got "fixed". If there's a long list, run it a second time; you should get fewer things repaired.

Once you've finished with Repair Disk, quit Disk Utility and reboot from your hard drive. Ideally, you should then be able to boot to the finder.

Okay, based on your repair attempt...hmmm...

If you attach the hard drive externally to another computer (either removing it, like you seem to be doing, or doing it the easy way with Target Drive Mode through a Firewire cable), can you boot the other computer from the MBP's internal hard drive?

If you're still able to boot into Safe Mode, try doing that and then running the installed copy of Disk Utility (Applications>Utilities>Disk Utility) and repairing permissions. If you do that (as with Repair Disk, you might want to run it through a few times), can you then boot normally?

My suspicion is that there's something goofed up in your OS. The normal recommendation is to reinstall the OS, but you don't have install disks. I think this experience proves that you need to get some - either a retail 10.5.x/Leopard install disk, or a Snow Leopard install disk.

Is there anything on your hard drive currently that you want to preserve? Aside from not currently having install disk(s), is there a reason you couldn't reformat the drive (to clean up any possible bad blocks you might have) and start from scratch?

And hey: Can anyone tell me why paragraph breaks on this wiki are so scattershot? I keep formatting the breaks the same way (two hard returns), but sometimes I get a paragraph break and sometimes I don't (like in these comments). It's very annoying. Hard to read, too.

This raises the possibility that the RAM footprint and CPU draw of 10.6.8 exceeds the capacity of your MBP as it's currently configured. If you can boot into safe mode, you're shrinking the RAM footprint. How much RAM do you have installed, and how fast is the CPU? I'd max out the RAM first, then try reinstalling 10.5.8 and see if you can boot from that.

I think every machine has an optimum OS. Sometimes that's not the latest OS the machine is theoretically capable of running; installing the latest n'greatest is often a way to make an old system unusably slow. Although my B&W G3 could run 10.3.9, it behaved much better under 10.2.8. Same with my FW800, where I left it on 10.4.11 because 10.5 slowed it down so much.

Don, I'm guessing you've moved past this issue. But just in case you're still working on this, another thought comes to mind:

According to Mactracker, the A1150 MBP will run up to OSX 10.6.8. But the MacTracker page also lists a MacBook Pro EFI Firmware Update 1.2 for that system, which can be installed with any boot system down to 10.4.6. It's possible that the Snow Leopard installer requires that firmware update be installed before the system installer can be run...Since you've said you can boot other machines from your old drive, when using the drive as an external boot drive, have you tried to boot the A1150 from its original drive as an external? If that works, there may be a problem with your internal drive bus.

I have the same problem on my A1150 Mac Book Pro with a grey screen at boot up after the apple logo, even after a SMC reset, and PRAM reset, same issue, but I can boot using a safe boot, although the mouse has a small checkered box once I am in OS X 10.6 Snow Leopard. I ran disk utility in Safe boot from another disk partition with another copy of OS X 10.6, and found no problems with bad blocks / inodes on the hard disk, or disk permissions issue's.

This 2006 Mac Book Pro computer was given to me by an Apple consultant who told me that it would only boot into a black screen so his customer gave it to him when he upgraded him to a new Mac Book pro, it also had no video using an external monitor.

I googled the black screen issue, and found a you tube video on "How to Bake My Mac".

I thought what do I have to lose, a new logic board would cost more then what these sell for on Ebay, so I thought I would see if this was a hoax or would actually work, I also wrote to mythbusters first and posteed on their facebook page asking them if this would work, but after several weeks with out a reply, I decided to use Ifixit to see how to take it apart, and removed the logic board, which has an embedded ATI 1600 GPU. I triple wrapped the logic board in foil, exposing just the GPU chip, and placed it in the oven to re-flow the GPU chip solder, after it cooled down I put the Mac Book Pro back together and installed SMC fan control to raise the speed of the cooling fans in hopes to keep the CPU, and GPU cooler, and it's been working for several months with out issue, until this past week. 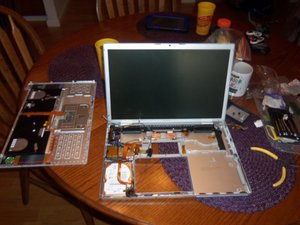 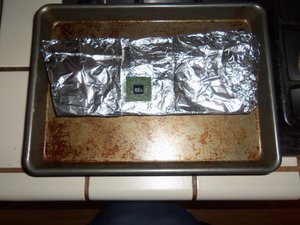 Could this be an issue with the PRAM battery causing the grey screen, or possibly the GPU needs to be re-balled with a BGA reworok station for a more permanent repair?

The Unemployed IT guy!