Problems with new battery not charging

The original battery was only lasting about an hour so ordered a new battery.

I followed the iFixit guide to installing a new battery.

Initially it was working fine and was showing as good health in Cocnut battery.

I decided to remove the battery as I had not glued it into place as yet.

I was about to glude it into place but tried to re-connect and turn it on. 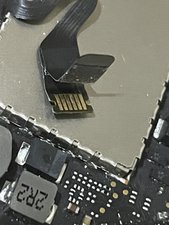 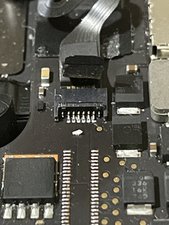 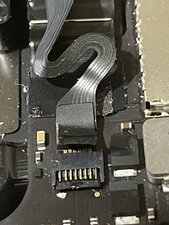 Have you calibrated the battery? The software learns and keeps track of the battery's charge to take what is essentially its best guess at how much charge it has left. When you change out the battery, it's then working off of old data that's wrong for the new battery.

The calibration procedure allows the computer to learn the charge curve of the new battery to correctly report the amount of charge it has. So don't pay any attention to the reported battery percentage until you've run a full calibration, as it will almost certainly be wrong. Here's a guide to the procedure.

Closeup of the battery connector. 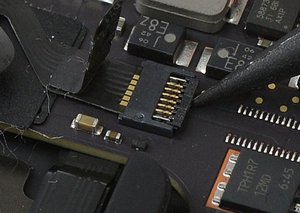 Hi Jerry, thnaks for your reply. No I haven't but the problem is with the new battery it stays on 1% and won't move. It says battery is not charging. I left the laptop plugged on today for well over 7 hours and nothing has changed.

I have to admit I find the battery connector on this model very poor and very difficult to attch. I am worried that the connector on the motherboard mabe damaged. I now have 2 new batteries and one old one none of them seem to charge any more....What can I do?

The ZIF connectors used are pretty reliable, so it's not all that likely that it's damaged from normal use. At this point I'd suggest opening the case back up and reseating the connector. I added a closeup of the connector with the cable fully engaged; make sure yours looks like that before you snap down the locking tab. While you have it out, it wouldn't hurt to clean the contacts on the cable with isopropyl alcohol; you should preferably use some with a high alcohol percentage; the 70% stuff we normally have around the house isn't ideal, as it frequently has additives.

If you want to take a couple of pictures before you button it up, that might help us diagnose if there's a visible problem or not. A picture of the flex cable by itself and a photo once it's been locked down would be good.

I have tried to reseat the connector and I have attached some photos. I have ordered some of the isopropyl alcohol off Ebay and waiting for that to get delivered.