Battery at 0% and not charging - computer sluggish

My computer is 7 years old, and I recently replaced the battery for the first time about 1 month ago (with an ifixit battery), due to the old battery beginning to swell inside the computer. The battery replacement went well, and an experienced friend who has replaced many batteries did it for me. The computer performed well after that, and had a much longer battery life.

Last night, I noticed my computer was extremely sluggish. Thinking I just hadn’t restarted it in a while and that I maybe had too many things open, I shut it for the night (didn’t shut it down) and put it away. The next day, I tried running Zoom and my colleagues are saying that my audio and video is lagging badly, and I notice that when I type, words appear slowly, internet browsers load slowly, and applications open extremely slowly. I then saw that at the top, it said 0% battery - which was weird, because I had it at 100% when I stopped using it the night before. I clicked on the 0% and it had this message: “0%, Battery Is Not Charging” - but it is plugged in. The power adaptor’s light is yellow, and no matter how much I leave it plugged in, it does not increase from 0% or change to a green color on the magsafe cord.

I checked to see if the battery had failed by clicking the Apple button —> System Information, and strangely enough, it says this battery is “Normal” but has gone through 0 cycles (I’ve been using it for about a month) [image below].

I tried the classic restart, but no luck. Once I logged into my account, the computer loaded extremely slowly (still very laggy once it logged in, too). I tried doing an SMC reset and then a NVRAM reset, and both appeared to work properly, but did not solve the problem. (At one point, the battery read 77% for about 30 seconds, but then went back to saying 0%).

Then I tried opening the computer up and unplugging the battery from the computer, waiting a few minutes, and plugging it back in. Upon restart, I did the SMC and NVRAM reset again, and it did not change anything - still 0%, “battery not charging” even when it’s plugged in.

Has anyone had this issue before? Do you think it’s an issue with the new battery I purchased from IFixIt, or something else with the computer? 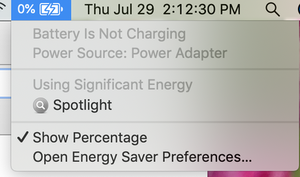 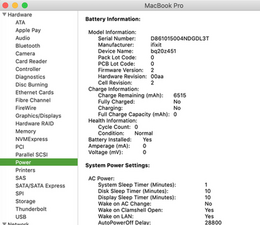 Edit: Tried to put my battery in my friend's computer (she has the exact same one), and it exhibited the same problem, "0% battery, not charging" and it was super laggy. I've contacted IFixIt and hopefully they will replace the battery! Now that I've removed the battery from my computer and am using it plugged in (basically as a desktop at this point), it seems to be working almost normally, which is really awesome. I’m so glad it’s a battery issue and not an issue with the computer itself.

Sadly when batteries go on Retina Macbooks they tend to underclock the CPU. Your best bet is either go and replace the battery (iFixit offers good quality replacement batteries). I have also seen some people successfully disable the power management in macOS but that doesn’t fix the problem forever, only allows you to get use of the computer until the next time it updates. I’d suggest doing two things to confirm the issue, install Coconut battery (You can get this on MacUpdate) then install Intel Power Gadget to see what your CPU status is.