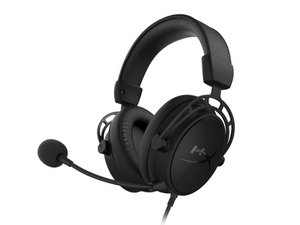 Over-ear headphones designed for gaming, generally tuned to enhance spatial awareness and built with a microphone to allow communication with other players.

So this is the single ear/mic setup that only came with the chat pad and still sounds way better than the new ones so I want to rewire it since they’re too small to strip and give out, It still uses a 4 pole with 4 wires. On the headset it’s got a blue and black soldered to the headphone portion and a white and exposed copper going to the mic. You can’t see how they wired it to the jack due to plastic melted covering they do. I have standard pre-wired 4 pole replacement with the red, green, black, and white wires. Can’t find a diagram anywhere. Any suggestions for testing or someone have a diagram? I still have one somewhat intact but the mic was starting to cut out.

I think I did work it out but it’s still a bit confusing as it’s not stereo with a single headphone. I tested the one I was trying to replace it with and I got the microphone sorted out but with the one end not being accessible and already malfunctioning some. It’s hard to say if they’re accurate as the white and copper exposed wire aren’t soldered together but they are shrinktubed together in the headphone. I may have found a good one to test but one know for a couple days. Just getting more resistance than expected in a couple spots but that’s probably the damaged part.

Have you disassembled it yet? If you have a digital multi-meter you can use continuity mode to check which wire corresponds to the rings on the jack.

The top two rings are for left and right and the last two is Mic and GND depending on the standard that the headset is wired to. On gaming headsets usually the last ring (where the cable starts) is the microphone. (AHJ-standard as below)