I would like to ask if anyone has encountered a same or similar problem, and what the solution could be.

I accidentally pored water on my MacBook Air. After drying it for days in a “tent” position, I tried to turn it on, but no response. When I plugged it in, the charger’s light did not even appear at all.

I opened up the back of the lap top and took it apart to see what is going on. When I reassembled and plugged the computer in, the charger’s light appeared (red), and I was able to turn the lap top back on.

While it is running, everything seems to function perfectly on it.

The problem is that once I shut it down, I am unable to turn it back on. I can only do it if I open the back of the lap to and disconnect it’s battery cable from the board, wait a few seconds, and plug it back on (I do not even have to take out the whole battery, just disconnect it from the board).

I run diagnostics when I turned the computer on, and it suggested me to get a new battery. So I did! Now I replaced the battery, but the same problem occurs even with the new battery.

-If I shut down the computer, I can only turn it back on when I open up the back, and unplug the battery cable from the board and plug it back on after a few seconds (it is enough to just unplug it, I do not have to take out the whole battery)

-Then I plug the computer in with the charger, and it turns on

-When the computer is on, it is functioning perfectly without any problems or glitches

-If I shut the laptop down, then I can not turn it back on without going through the battery process mentioned above

I am not good at computers so please excuse me if my description is unclear. I would really appreciate any help or advice about what the problem could be and how to fix it, what to replace perhaps.

Thank you so much!

PS. These are the screenshots after running the “coconutBattery 3” app 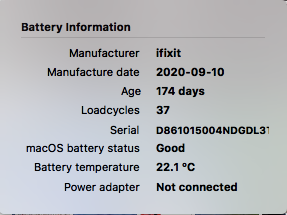 *Screenshots with MagSafe charger plugged in 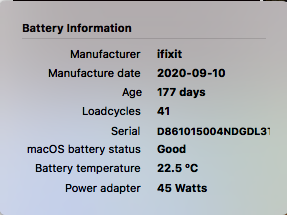 The logic board has gotten damaged, on the other side is the logic which deals with the charging (SMC). You’ll need to take the logic board fully out to inspect it for corrosion damage MacBook Air 11" Mid 2013 Logic Board Replacement you may need your logic board repaired or need a new one.

Thank you so much for your answer.

Do you think it is still the case even that everything work absolutely fine when the computer is running? It is just the only way to turn it on is that I unplug the battery cable from the board from a few sec, then plug it back.

Just want to make sure because everything is really functioning well besides the "turning on process".

Thank you very much for your advice.

@pothos - Let’s get a better view of things, install this gem of an app! CoconutBattery take a snapshot of the apps main window and post it here for us to see Agregar imágenes a una pregunta existente

I just ran the app you suggested, thank you.

I attached the screenshots at the end of my original post.

@pothos - Let's give it one more try this time with the MagSafe charger plugged in.

@danj I appreciate your help. Just added screenshots with the charger plugged in.

There’s a possibility that your power button is non functional shorted by liquid that’s why disconnecting and reconnecting the battery is the only way to start the computer. I would check this before replacing the logic board since the problem will not be resolved.

Thank you so much for the advice!

How would you check it? Just simply look for corrosion around the power bottom?

The power button circuitry cross the keyboard goes to the keyboard socket via the keyboard flat cable (pin 5 I think). The short could be anywhere in the keyboard or in the button itself. In this case you need to replace the keyboard but it's not an easy job (metal rivets holding the KB to the case). Better to buy a used top case.