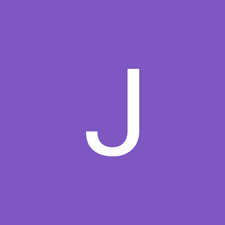 Newly replaced will not charge

edit: I just replaced my battery using the iFixIt kit, and followed their online instructions (which were great) and everything went as expected. I felt pretty confident after I was finished reassembling, but now the battery will not charge at all. I can power the Mac on with the power button, but if I unplug the Mac it immediately powers off, even after I left it plugged in all night. The cables look to be correctly connected. I have been back in the Mac twice now and I can’t seem to find a visible problem. I tried to reset the SMC as well.

See the image. It seems to me that the problem has to be in one of two places:

1) The battery board data cable connector (green arrow). I noticed on the replacement battery at the point when I went to plug it in (at the end of the whole procedure) that the little tape covering the battery board connector was missing from the ribbon. I tried to remove the tape from the old battery to reuse but it does not stick very well. However, I did my best to seat the connector properly. It looks even but would not go in completely flush. It looks exactly like the image in step 12 in the online guide, so I believe it is correctly seated. The ZIF flap does “lock” it in place.

2) The battery power connector. The pancake screw is firmly (properly) tightened. See that little bulge in the flexible connector (red arrow). Is it supposed to be bulged a little like that? It sort of looks like it is in the image in step 14.

So either I do not have some connector connected properly, or the replacement battery is faulty, or somehow I damaged something (but It sure didn’t seem like anything was damaged in the process).

I would appreciate some help. Google is not yielding and helpful results; neither are Apple communities. 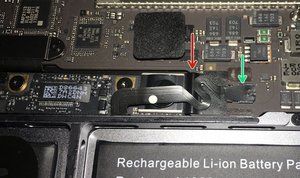 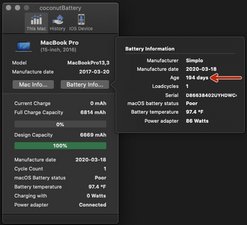 Before you replaced the battery was the system also only running off of the charger alone?

It would have been nice to have gotten a CoconutBattery output before you had replaced the battery. I wonder if you really had a different issue from the start.

The USB-C MUX (U3200) chip may have problems telling the charging MOSFET to enable so the battery gets charged. This is a logic board level issue not a battery and clearly the system is able to gain power from the USB-C port/s just not switching the logic to power the charge of the battery.

The old battery worked just fine. Would charge completely and I could use it pretty much all day. My only indication of failure was that my case was swollen. When I took the case off I could see the old batteries were swollen. There were no problems before the battery was replaced.

I am beginning to think that I should have just taken the MAC to the Genius bar and paid up. I fear it may never work again and was a good laptop.

It's been tough to diagnose battery vs charger logic issues on these newer systems! I wish you had posted a question back when you noted the case was flexing!

Apple did have some issues with the 2016 models with the power logic. One could even been the cause of the battery swelling up!

Sadly you'll need to find someone with good skills to fix your system or you could go to the Apple Store to see what they say.

I had the same issue. My MacBook Pro was charging the battery, but it wouldn’t boot (this was after I replaced the battery). Solution: I took the back cover off and rechecked each connection. This is what I found to be the cause of my issue: after removing the LEFT hinge cover, then go to step 29. remove the silver metal bracket. Under this bracket there are TWO connections. There is a small connection hidden under the large connection; the small connection was not connected, and this was what cause the issue. I connected it and my MacBook Pro is working fine with no issues whatsoever.

You need a new usb c

There are 4 USB-C ports, and I have tested all of them. Peripherals like external monitors headphones and external cameras work just fine. I tested charging the laptop using all 4 of the USB-C ports, but none of them will charge the Mac. Plus I have to have the power plugged into a USB-C port to power up the Mac.

Is any thing shorted