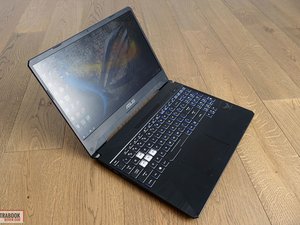 I am repairing a broken screen on an Asus Tuf FX505GT-BI5N7 gaming laptop I purchased brand new from Best Buy last November. The screen is held in with a sandwiched combination of strips of black double sided tape, a 1mm thick plastic spacer, and possibly clear transfer tape? I can't for the life of me figure out what tape this is. Again there are NO screw fasteners holding this in, just tape! There is a metal frame on both sides of the screen but I didn't need to unscrew it to remove the screen to find the screen model numer. The black tape seems to have stronger adhesive than the clear that's in there. I even spoke with my trusted local computer repair guy and he said that seemed strange it was mounted that way without screws / tabs. Please help!

Here’s a video that shows a screen replacement in an Asus FX506 laptop which may help.

I realize that it is not the same model number but looking at the video it appears that the LCD panel is held in by double sided adhesive tape which sounds similar to what you’re describing.

The parts list for your model doesn’t show the tape as a separate part so perhaps it comes with the screen.

Have found a link which has a video that shows how to install a display which has the same part number (18010-15670400) as the part number for the display for your model which may also help. It shows two strips of adhesive tape, one on either side the back of the panel, although they’re not black but clear or perhaps white.

Thanks for your help! The tape / plastic spacer combo on my screen is much different than in the video. Maybe it's for more shock absorption as this Tuf laptop is described to have passed military grade testing. I have received a replacement screen which has no tabs, tape, etc. As it's a more wallet friendly compatible replacement item intended for more universal applications. I have also viewed this informative video https://youtu.be/u-FdOTlZWkU which has led me to order some tesa tape to use for my repair. I'm hoping all goes well!

Hi, is your problem fix?n I would recommend fixing it would double-sided tape as a solution, so you don’t damage the screen and can change it in the future again, have in mind that due to being tape, it wont resist much heat