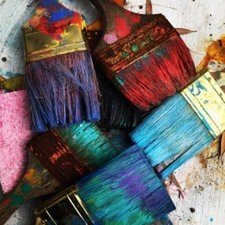 I know that this question has been asked a lot but I have a slightly peculiar situation.

Recently I swapped the display on two Mac Books, which I have done successfully several times before. In one of them I also changed the battery, but couldn't test whether it worked flawlessly yet.

Now, after swapping the display both don't turn on anymore, while in Mac A the Fans start running as soon as I hit any key, Mac B (the one with the new battery) stays silent. I tried the caps lock test - nothing, I tried the shift-ctrl-combo - nothing.

Now my question is whether there is a way I could have shorted both machines? I always repair with a normal kit, am very careful about where I put my fingers, attempt to ground myself by touching the metal before doing something inside. I did put the two computers on a tea towel (to prevent scratches) which is not 100 percent cotton. Could that be the issue?

Before I do anything else, I disconnect the batteries of course.

I bought a multimeter, hoping it would help me but I haven't found a schematic of the circuit yet.

I tried to switch the logic boards (the small ones) and the IO cable, nothing.

I am out of ideas, so I would really appreciate some help!