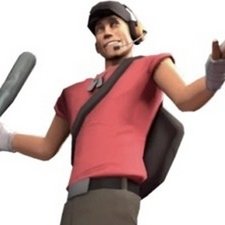 I had recently bought a use MacBook Pro 2016 13 inch with a TouchBar and had opened it up to check out a speaker issue and to my surprise before even opening it someone had stripped a few screws. This had been the least of my issues as when I took the bottom panel off I had seen a lot of bad screws and of course the missing capacitors. I had looked up a scan of this motherboard to compare it to the missing parts and I know what’s missing but I have no clue as to where to find them. Also I can’t tell what it affects as there are other various problems it has. The display has overexposed colors and a flickering when grey is on the screen as well as Touch ID failing to work. Is it possible the missing capacitor is causing the screen flickering? 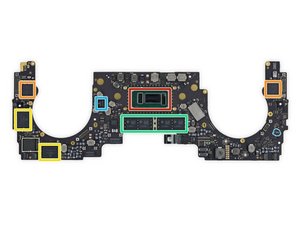 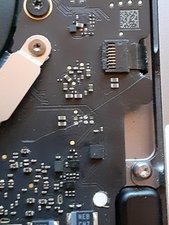 The four SMT devices are all SMT capacitors. They are part of the Sleep1 & Sleep2 power stages. I can’t figure out why someone would remove them on purpose. I’m thinking someone had a slip with a screw driver or thought these would correct the display issue you have (?)

While replacing them is a good idea, I don’t think that’s going to fix your display problems.

Frankly, I would return this system and get my money back!

Between a new logic board and the possibility of also needing a new display you’ll end up sinking a lot of money into it, and that still doesn’t get into replacing the speaker which likely have been blown out as well (an early issue with this series)

Ah okay. Well, thank you for your answer! Upon closer inspection, I've noticed they have seemed to of actually make small punctures in the display ribbon cable which is why I have those display issues. Also just curious, but what do the Sleep 1 and Sleep 2 power stages do?

Ouch! This sounds like someone was mad! Sabotaging the system!

As I feared you would likely need both a new logic board and display as the display cables can't be replaced on there own ($$$$) This is a money pit!

The reduction of power use if you leave the system turned on. Sleep2 is the deeper state (least power)