I am currently refurbishing my niece’s 2010 MacBook Pro. I’ve noticed that I’m getting 20, maybe 30 minutes tops out of a fully charged battery with very light websurfing. Here’s the equipment:

Single webpage open in Safari, no other programs running.

I have performed several SMC resets (appears to work, as charge light on charger port changes from amber to green for a few seconds, then turns amber again), as well as reset the NVRAM several times. I have also removed and reinstalled the battery several times.

I’m stumped as to why a 6157 mAh battery with only 800 cycles would discharge so quickly. I’ve had batteries well into 1000 charge cycles with 4000 mAh capacities last far longer than this. Any ideas? 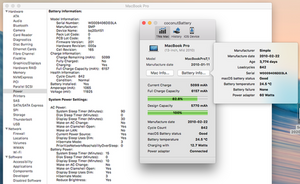 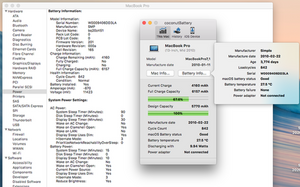 Is this still the original battery?

Sorry forgot to mention. This is an Anker replacement battery, purchased in 2017. And this is the 13" MacBook Pro.

Lets check the battery, install this gem of an App! CoconutBattery. Take a snapshot of the apps main window and post it here for us to see. I really we need two snapshots one with the charger plugged in at about 80% charged and the other with the charger disconnected after waiting a good five minutes. Agregar imágenes a una pregunta existente

@danj Already had coconutBattery installed (yes it is a great app!), I've added the two screenshots you requested to my original question. The only app running during this 5-minute period was an open browser window in Safari, set to a page with no Flash content. No changes to the webpage, just sitting there.

At this point I think you need to try another battery to be sure. Batteries are not just the Lithium Ion cells, they have sensors and a micro controller with programing. At this point I’m thinking something within that part of the battery is faulty.

I'm thinking there's something wonky with this battery as well. I have an original Apple battery that I keep around for testing purposes that has 1053 charge cycles and only holds about 3200 mAh. With this older, "weaker" battery fully charged, I streamed a 2 hour YouTube video and had my Energy Saver settings set to not go to sleep or dim the display. The MBP ran for just over two hours before it went to sleep.