How to properly plug, what order, the sata connectors from a dual HD

I have just opened my mac, cleaned the hard drive fan, and a connected my two hard disks in different sata ports, but i have no idea in which way. I have a dual hard disk system with the original hard disk and one ssd i added in a tray in place of the dvd i removed.

Previously, the connections were as they were originally: sata conector pluged in the original place for the hard disk, sata connector pluged for the dvd, that i use now for my ssd.

i wanted to use the full capacity of my ssd so i connected the sata II in the sata III socket of the motherboard.

but something went wrong so i replugged the two of the sata connectors and i dont remember which one is in which place. But i am sure i they are both connected in the sata III plugs, but i dont know where is the hdd and where is the ssd plugged.

Apple logo shows up, but it shows like traffic sign after a while and cannot start. The same from the both hdd and ssd.

my question: is there any particular order i need to follow when connecting two hdd/ssd in terms of sata connection port number?

can you advise how can i resolve this issue?

The easiest way is to use an external bootable drive either USB, FireWire or Thunderbolt to boot your system. Once you have it running go to > About This Mac > System Report - click on SATA/SATA Express to get a listing on your SATA Ports.

Let’s assume each drive you have is a different manufacture and/or size you should be able to identify each and then looking at the SATA speeds identify the optical drives SATA II port. Then you only need to worry about the other two SATA III ports.

As far as your problem: Each SATA port is able to be booted from as long as you either set it in EFI or over-rode it using the Option (⌥)  key to get to the Startup Manager.

I’m suspecting the drives SATA connection is messed up! Here’s the port layout: 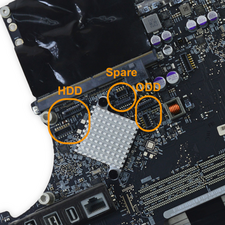 Now looking down locate the PCH heat sink The visible Left connector is the Spare SATA and just behind it is it’s power cable. On the Right is the HDD power and just below a a bit more to the right is the SATA port.

You’ll note the SATA port connectors are not all the same! The Spare has 4 pins, the ODD has 5 and the HDD has 7. Did you force the wrong cable into the wrong connector?