Why won't my phone turn on?

On the morning of 12/31/2019, I realized that my power button was being a bit iffy (it took me over ten minutes to turn the phone on that morning). I would press it to turn off my phone and it would show me to shut off menu. I didn’t really mind until later, right before midnight, when I tried to power it off for the night. My problem had changed- now it wouldn’t show me the shut off menu. I went at it for a good ten minutes, ducking into the settings, seeing what I could do. It only showed me the menu after I called my sister over for help and she swiped back and forth between slides and I snatched the phone back. I don’t know what really brought up the menu that night.

The next morning, I realized after a while that my phone was not turning on. The usual long press of the power button was not working. Me, being emotionally attached to my phone, went mad and immediately started doing research on another device. (This research was done on an iPhone 4 that has, I suppose, managed to outlive my phone.)

I have already tried: plugging in the charger and

-long pressing the down volume and home button

-long pressing the middleground between the volume buttons

-long pressing the up and down volume buttons

-long pressing both volume buttons and the home buttons

I’ve tried most of those while not plugged in as well.

One time did holding the down volume key and home button show me that the phone was at 0% and charging (after I’d shut it down at nearly 100%). It no longer tells me that it’s charging or what it’s at when I plug it in.

I have also tried taking the battery out and putting it back in. The act usually boots up my phone, but now it just vibrates once and shows that first ‘Samsung Galaxy S4 (or whatever)’ and blacks out instead of going through the rest of the show. Sometimes it doesn’t even do anything, just stay black, no vibration or anything. Surely there’s nothing wrong with the battery, since I have already had it replaced, but at this point, I wouldn’t be surprised.

The phone has shown no signs of life since yesterday- no vibrations, model name screen, blinking light, nothing. Did the LED light show red when my phone was off before? My bad memory does not help.

Last night I smacked the phone a few times after long pressing the power button and it buzzed and showed the ‘Samsung Galaxy S’ screen but that was all. I hit it with my palm a few more times while holding the button after that, but nothing happened and I’m afraid I may have messed it up more.

I may have not executed these properly or not held the buttons long enough, I don’t know. I’m open to all answers, really. You never know. Sorry for writing so much; I’m a rambler.

@skwirrle this “now it just vibrates once and shows that first ‘Samsung Galaxy S4 (or whatever)’ and blacks out instead of going through the rest of the show. Sometimes it doesn’t even do anything, just stay black, no vibration or anything” would prompt me to start with a new Battery. If nothing else it will at least provide you with a known-well starting point for further troubleshooting which would look like this: 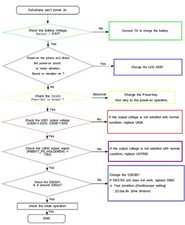 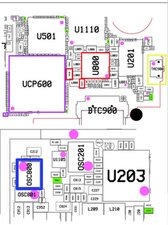