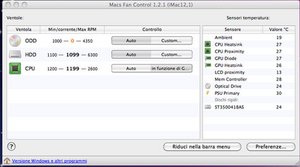 After a GPU “reflush” (in simple words “soldering”) done by an indipendent repair lab, the ODD fan in a Mid-2011 iMac runs at full speed.

With the Macs Fan Control utility I can change the speed of the HDD and CPU Fans…….but I can’t change the ODD Fan’ speed.

In the Macs fan Control panel I see a 0 (“Zero”) indication for the ODD Fan.

SMC reset do not resolve my issue.

1) The ODD fan provide also the cooling for the GPU Diode and GPU Heatsink.

2) A sensor for the GPU board is damaged and for this reason the ODD fan run at full speed.

I think that to open the iMac and cut the ODD fan power cable (disabling the fan…) is not a good idea…..

Beside a complete logic board replacement what can I do to slow down the ODD fan??