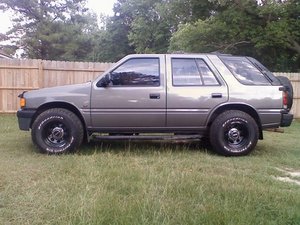 Isuzu introduced the five-door Isuzu Rodeo to the United States in 1990 for the 1991 model year.

Hi, hopefully someone can help. I have a 97 Isuzu Rodeo. The happy medium for the RPM's while in neutral is right inbetween 0 and 1 RPM's -- at about .5. That's the norm for this car.

What's happening though is when I'm driving the car at a slow pace then pull up to a stop, I'll take it out of gear and put it in neutral, but the RPM's will spike up to about 1.5 - 2.2 and stay there. 2.2 is about the highest. The light turns green, I put it back in gear and then the RPM's settle down once my foots off the clutch and I'm driving.

Pushing the clutch back in though, to change gears or to stop again and be in idle makes the RPM's shoot back up to that high rev range.

It usually subsides and goes back to normal once I've driven for 5 minutes or park somewhere and leave the car off for a few minutes. That seems to make the issue go away, but lately it's even been starting just from a cold start and still reving high even after turning the car on and off a few times and not even going anywhere.

The check engine light is on too, which I've had addressed and fixed two separate times in the last few years. Hopefully someone has some insight. I've taken it to the mechanic twice, but of course once I got there the car was not acting up and the RPM's were fine, and so they couldn't figure it out.

@coffeeallday have your Rodeo's OBD scanned to see which codes it is throwing.

@oldturkey03 thanks for the reply. I'll get on it.

It sounds like a vacuum leak but maybe a code scan will return a fault, if no fault then you will need to get a PAY scan done to look at the data from the TPS, IACV, MASS, MAP, etc, and a couple other items that can control the air entering the engine through normal means. May be out by a little but not enough to set a code yet but an experienced technician will see why the idle is high. Some of the items I mentioned may just need cleaning. That would be my first step.

Your timing belt is probably about to break