my macbook pro’s display shows bluish spots. you can read about this issue here: https://discussions.apple.com/thread/830... 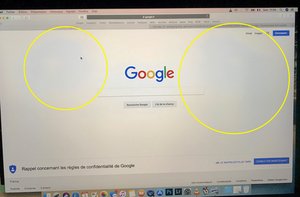 what is causing the problem? how many of you have the same issue? first keyboard-gate and now display-gate? how should i proceed?

Just like CRT’s which encounter burn-in, LCD’s also encounter image persistence. Unlike the electron beam burning the phosphor of the screen’s coating in a CRT. The liquid crystals in the panels sandwich can loose their elasticity returning back to their neutral position.

Brightness and heat tend to aggravate this when you have a static image which stresses the crystals.

As to this being a common occurrence within this series of MacBook Pro’s So far there just isn’t. The larger 27” displays tend to have a bigger issue with this across all makes of displays.

There are a few things you can do to improve things. First alter your background from an image to a solid color, ideally a mid grey. Next there are a few programs which can exercise the crystals within the panel, while the extreme damage won’t be corrected, minor damage does seem to get better.

Hey, thanks for this information. I have the Bluish spots to.

Can you name me some software "which can exercise the crystals within the panel" ?

I didn't found anything which is helping, only software for dead pixels.

All I do is create a JPEG of the full screens dimensions (The RGB colors: Red, Green, Blue) which has the area altered that needs attention with the apposing color. Think how the Japanese flag looks with a Red center dot with a White field. Here I use a full Red background with a Green of the areas that need correction. Then I create a second JPEG which has Green where the Red was and use Blue where I has Green, Then I make a third JPEG which has the base Blue and the areas Red, the forth is then Red area Green, and the last Green and Blue.

OK now that you have the needed images lets automate it using Automator script flashing each in rotation for 1 second over and over again for a few days at high brightness that the best you can do. If that fails to improve things its time for a new display.

Thats what this app does LCD Scrub it does it across the full screen vs what I do.

I have this issue but have rarely used my Macbook Pro in Laptop mode, majority of it's time (38 out of 40 hours a week) it's attached to an external display and the lid closed, LCD off.

It's a very rorschach ink blotch test type of blotch

@notdavis - Your's is a bit different that's a cooked screen ;-{

The liquid within the LCD material the screen has evaporated out.

This is not a burn in. I've had the screen replaced twice for this issue. I'm going for my third tomorrow. I'm sure many others have the same issue they just haven't noticed.

mmarchant - You are very correct its not CRT Burn-In! What was clearly stated its LCD Image Persistence

Another issue is pressure spots as the gap between the two sheets of glass of the panel where the liquid sits can get squeezed out so the liquid is not present creating black splotches.