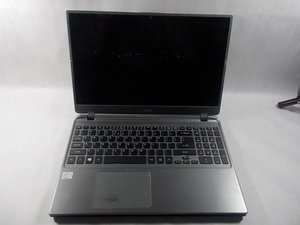 How to short the power button switch to turn on the laptop?

It could be turned on but then it would shut down unexpectedly after a few seconds.

At first, I though it was either the AC adapter or DC jack.

Both of these were tested and replaced.

I also did test where I removed the RAM, 20G SSD, Hard drive etc.

I have been able to keep the laptop on by briefly shorting it on with the power button flat ribbon cable and then disconnecting it.

I think the button on the board is broken turning off the computer.

A replacement part has been ordered but I am weary that it will actually get shipped.

The ribbon cable has 8 pin-outs, it it possible to use another power button switch from another laptop?

Also, What on the switch board could be making the laptop shut off?

I tested the switch button with a multi meter and it seems to work as it should.

Also, I'm attempting to figure out the pinout.

so far I have

I received the new switch and installed it but still have issues.

The laptop stays on and the LEDs for the battery and AC adapter work but switch itself does not.

It does nothing when pressed.

I have tried going through the power settings to adjust what the button does in the Windows software but that does not work.

I have also tried updating the drivers int he ACPI computer hardware but that also did not make a difference.

I though maybe the board is somehow grounded by/to the case (like the battery) but am I wrong to think this can't be the case since I can short the laptop on while it is open . . .

I will retest the old and new power board switch today.

But, any suggestions would be helpful.

So after ordering another button board (LS-8501P) after the first replacement part was a dud, the computer works as it should.

I can’t be sure until I desolder the button but it seems like it broke while being closed so it would immediately turn the laptop off when it would turn on.

Thank you everyone who responded and gave me ideas and suggestions.

Can I ask where you ordered the replacement button board from?

Have you tried searching using the "board number only" to find other suppliers?

Don't know your laptop but try moving a magnet over the board.

Some power button boards have a magnetic switch in them that operates when the lid is closed to signal the BIOS to turn off the backlighting power to the screen. The magnet is in the lid. It may be what is connected to pins 1 & 2.

@jayeff Thank you for the link!

I actually have a part on order (i looked by part number - LS-8501P ) but i'm waiting from a response from the seller.

But, I will keep the seller you linked to in mind.

Thank you for the suggestion. I'll try that out with the magnet.

Haven't tried it but see if this link works to get the motherboard schematics so that you can maybe find out why the switch doesn't work.

Did you test the new switch with an Ohmmeter to prove continuity between pins 7 & 8 if any when the button is pressed/ not pressed?

I did test it but perhaps incorrectly. I will actullay redo my testing today.

I originally test the switch in two ways.

first, at the end contact point - pressed and unpressed

and then at the end of the ribbon cable.

The switch 'seemed' to work just fine so I figured I did it wrong or something else is triggering the shutdown.

If you can, try making this simple circuit to test the pinout. 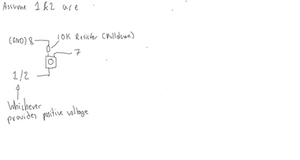 Sorry for the bluntness.

Thank you for the schematic.

I may try that if I get a resistor. I don't really keep any on hand.