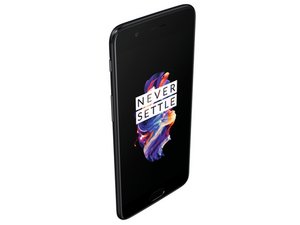 After display repair the volume button is stuck, what's wrong?

I replaced the display frame on my oneplus 5, it seems to be working again but when I try to start the phone it boots in fastboot mode & keeps scrolling through the menu options. I can't select anything when it does that, though pressing volume down stops it from scrolling. When I hold down the power button for a few secs it powers down. It also does this without the backcover mounted so I don't think it's stuck.

Thanks for your time!

Edit: When I hold down the volume down when powering on it starts up normal, everything works as it should be except the volume buttons. I can use volume down but volume up is unresponsive. Volume stays at set level, so it's not stuck always pressing volume down. I think I somehow broke it when I moved it to the new frame maybe? Still interested in your thoughts.

I know i had a similar issue with a OnePlus 3T, the sidebuttons are just glued to the side of the frame on the OnePlus 5T aswell right?

Anyways, my buttons wouldn’t stick to the side very well so i put my own double sided tape strips there, but the strips were too thick and that made the volume up button get pressed all the time when i sealed the phone up. So i simply removed my double sided tape and used B-7000 glue instead and that fixed the problem.

I too have used double sided tape and though I have had the issue that it was too tight when I put the back cover on the problem I have now also exist when the back cover isn't on.