MacBook logic board has damage to it from an explosion. Is it a worry?

I’m a little concerned about the health of my macbook pro 15” 2014 model. I was working on an assignment on it (on Microsoft Office) about 2 weeks ago when it made a pop and turned off. Smoke started to come out of the left hand side of the hinge. 10 minutes later, assuming it was dead, I tried to turn it on and it worked. Since then, I’ve used it for about 10 hours and it seems to be functioning fine.

I took it into Apple and they told me that they had found that something on the logic board had blown, but were unable to identify the part, its function, and what caused the explosion. They told me I could replace the logic board for around 900AUD, or otherwise start looking for a replacement.

I opened the laptop up myself for the first time since buying it, and took photos of the damage. Could someone please identify what this part does, and whether I should be concerned? Is it something that sound be fixed, and can it get worse? As I said, the macbook has been working normally since the incident, but I’ve been hesitant to use it too much, especially in a university environment.

Any help is appreciated! 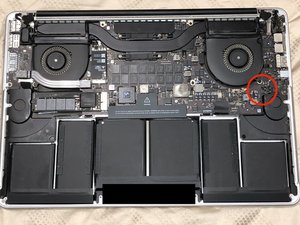 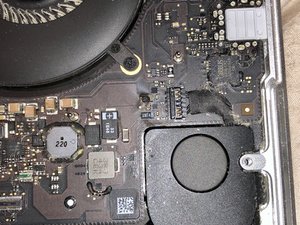 Answered! View the answer I have this problem too Subscribed to new answers

@applemarkb that is reference designator C6442 which is a 100UF 6.3V 20% capacitor in a CASE-AL1 package. It is a critical part of your audio speaker amp circuit. 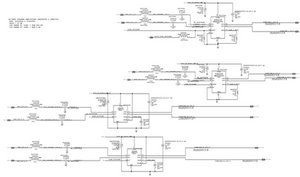 Hi @oldturkey03 Thank you for this. I'm not the most literate person when it comes to logic boards – do you think that this is something that can be left, or should it be fixed (i.e. will it get worse/damage the MacBook further)? What is the real outcome if I leave it as is?

@applemarkb it won't get worse, you just most likely won't have audio on your MBP

@oldturkey03 Thank you again! My macbook audio seems to be working fine at the current moment. Hopefully doesn't get worse :)

@applemarkb keep on working. If you do run into trouble you know you can always come back and we do not mind helping out further. BTW it is for the Left speaker connection. I'll add the schematic as an image to the answer.

This looks like a temperature regulator for your system, which controls the fan speed, and can tell the computer how hot the CPU is and the rpm of the fan. There must have been a small defect in the chip that made it explode. as long as you don’t use it continuously for a long time, it should be fine. But in the meantime if I were you, I would be saving up for a new logic board.