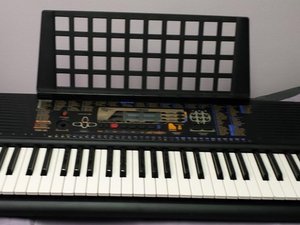 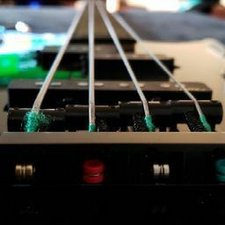 I have marked the keys that do not work in red on the image below.

I have taken apart the keyboard and came to the conclusion that the issue could possibly be the resistors on the board under the keys. I was unable to locate any schematics or information about the board and I am unable to identify what resistors they are.

The image is not super clear, I will have to get a better one when I get a chance to do so. 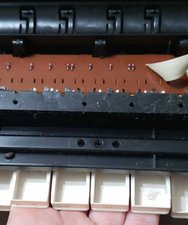 Those look more like diodes than resistors to me. But neither resistors nor diodes normally fail unless they’re handling significant power levels, which those definitely won’t be. I take it those keys are completely dead, not just intermittent (which would indicate a dirty or bad contact or a mechanical problem).

The fact that it’s a group of keys that don’t work leads me to strongly suspect that it’s a problem with the key scanning matrix, though 8 dead keys might have been more logical.

If there are 61 keys they’re probably wired something like in a matrix of 11 columns of 6 rows. A voltage will be applied to each of the 11 columns in turn to see which of the 6 rows in that column (representing 6 keys) returns the voltage through a closed key switch. In that case it would seem that the connection to one of the 11 columns is faulty.

Hopefully you should be able to see the matrix in some form, such as 11 wires feeding the columns and 6 the rows, or those diodes wired in groups of 6. (But note, I’m only guessing 11x6 on the basis of 6 faulty keys.) It could be a bad solder joint.

The six keys are wired in their own group and when I checked I got no readings from only those six keys. I am adding an image with the contact pads for the keys that don't work. I will circle them in red. I have cleaned the contacts and the rest of the board after I took this photo, there is still no power to these six keys.