How to repair J2 FPC on iPhone 5s?

TL;DR Leaving an iPhone to sit and then charging it will fix it sometimes. Because that’s Apple. So my question is, does anyone know how I can fix the connector or jimmyrig it, without microsoldering, or if i must microsolder, is it more likely that a first-timer would brick the phone trying this? If you think its safe enough to attempt micro-solder without frying it, (I’ve never done it before but price and time isn’t a concern, I just don’t want to break it since I got it working well enough), let me know. The connector is iPhone 5s J2, this is what it should look like: 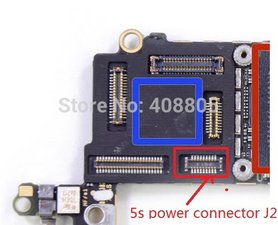 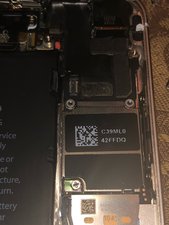 (to see it click on image and zoom to top left)

As you can see I damaged it quite badly, and the flex connector and everything attached would need replacement as well. Unless I could just do some sort of jumper set up with 18 micro solders connecting the plates to the connector wire. Let me know your thoughts, thanks!

Replacing an iPhone connector isn’t something very suitable to begin microsoldering, you have many soldering pins close to each other and quite a bit of other components all around. Chances that you’ll fight with solder blobs bridging pins forever are pretty high, but if you are brave enough why not ? From an economical prospective it makes no sense, parts and tools needed to have some chances to do the job properly will cost you much more than the iPhone value and it would be advisable to buy a couple of dead boards too for some practice before trying to act on your working phone. You can’t get a replacement connector in place without soldering either. Cheapest and safest thing to do would be having the connector fixed properly by someone into microsoldering. Just my 2c..