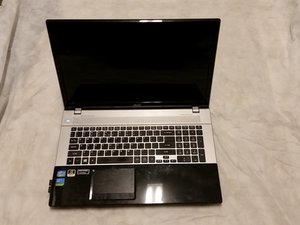 Acer Laptop won't turn on , AC Lamp is off even while the laptop is pl

Okay, I should preface this with the fact that I am not the most well versed in how these things work, so I will do my best to explain.

I have an Acer Aspire V3-772G-747a8G1TMakk. I don't know what specs you might need, so here is everything I can read on the sticker:

It ran great, had no problems for 3 years then I replaced the HDD when it started to show signs of failure and added an extra SSD in the empty slot...it ran smoothly for an extra 6 months , until today , yesterday it was still working like a charm...I put it to hibernate mode/sleep it and today it just wouldn't turn back on.

Plugged out: When I press the power button neither the AC lamp nor the Battery lamp turn on .

Plugged In with the battery: When I tried pressing the power button the AC Lamp turned on for half a second then turned back off. I could hear a faint high pitched noise (not coming from the speakers) , the fan didnt start whirling neither did the Screen turn on. The Battery Lamp which was blue , meaning connected but not in charge, promptly turns off while I press the power button, then turns back on ( I must say the battery is pretty much dead, I only keep it so that in case of a power outage I have a few seconds to save my data, but yeah it's pretty much useless)

Then I removed the battery, unplugged the power cable and held the power button for 30 secs- 1 minute

Plugged in , without the battery: AC Lamp turns blue for a short while then turns back off again, without anything starting to boot.

What I have tried:

-Unplugging and trying, plugging it back in and trying. All variations of taking out and putting back in the battery and trying to turn it on.

That is pretty much the end of my expertise level...

try taking it to best buy and see what they say