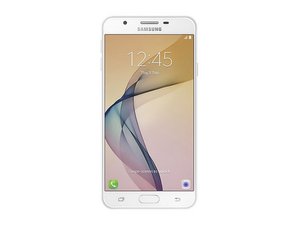 How do I fix faint lines on screen?

So I have the Samsung Galaxy J7 Prime, and until a week ago had a thick glass screen protector. About a month or two ago I must've dropped it, and the screen protector developed a screen-wide crack. I'm not sure if this added pressure or something to the screen, but within the week the screen began to develop faint white lines that kind of "blurred" the display on the lines. At this time, it wasn't too serious. I could turn the phone off and on again (just a quick tap of the power button, not a complete shut down) or apply gentle pressure over the screen for a minute and it would be fine again. This happened for about a week, and stopped altogether. It began happening about a week ago again, and for the last 5 days it hasn't gone away. There aren't any cracks on the screen itself, it looks normal until you turn it on. It's not completely stopping me from using the screen; it has no effect on me using it and registers all my touches. It's just kind of annoying to look at and would overall look better if it were fixed. I've tried entering "safe mode" to see if it is a virus or something from a third party app, but it still persisted, even after the restart. I'm planning on getting a new phone in a couple months anyway, but I would like to find out what to do to fix this (if at all possible). Thank you in advance for any and all help!

Here are some pictures of the screen on the :

Each picture has a caption explaining it to the best of my ability!

If you ran safe mode and it still appeared the same I would believe it's safe to say it's the LCD that's damaged.

You can also check the cable and see if you just need to reseat it, possibly loose. Video guide.

I would also recommend you back up your data on smart switch, just in case the screen eventually goes out.