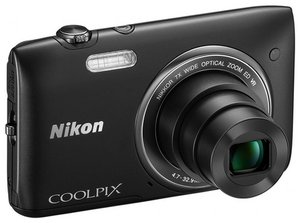 How can I replace the orange tab that keeps the battery in the Camera?

Yesterday, I was changing the battery on my Nikon Coolpix S3500 Camera because the battery ran out & I wanted to keep using it. I gently pushed my thumb on the small orange tab next to the battery & SD Card compartment, & suddenly, the orange tab breaks off. It's a major pain that this happened to me! Now I have to use folded papers & scotch tape to keep the battery in the Camera & it works just fine. The major problem that I'm having right now is that I've been trying to recharge the battery while holding it with the papers & the tape, but after about anywhere from a few minutes to about an hour later, the battery stops charging & won't continue to recharge! I'm worried that if I keep doing that, it's going to shorten the battery life! What should I do at this point? I already got in touch with Nikon & they recommended that I send my Camera in for repairs & that it'll take up to 3-4 weeks until it's fixed & ready for me to use again. That's not an option for me! I'm going to a few places that I'll need to use my Nikon Camera for & I can't send it away & also risk it getting lost on its way for repairs & possibly never see it again! I don't want to take that chance, not if I can help it. What should I do at this point? As I see it, the only things that I can do would be to try to find a inexpensive Camera that the same as mine & use the orange battery tab to replace the 1 on mine that broke off, or go on Social Media & ask if someone has an old Nikon Camera like mine that I can use the battery tab to replace the 1 in my Camera. What do you think that I should do?

Here’s one that you may wish to consider