Why is my trackpad making a rattling noise after replacing battery?

Yesterday I replaced the old battery in my mac air and afterwards noticed that, whenever I touched the trackpad, it made a rattling noise. For some reason, it appeared that the trackpad had become loose.

So I did a little experiment: I took the new battery out and put my old battery in and the noise and the rattling disappeared.

So I'm pretty certain that it's the new battery that's causing the noise/rattle.

Any suggestions on what I should do? I actually tried putting a foam material between the battery and the trackpad to "push" the trackpad upwards, and the noise actually went away but it created another problem: the click function of the trackpad disappeared. I'm not sure how to solve both problems simultaneously.

Any ideas would be appreciated. Thanks.

Well, it's like this... Is the glass half full or half empty?

The reason the old battery stopped the noise is it has swelled up so it's pressing on the trackpad. The new battery is OK!

Because of the damage, the old battery caused your trackpad now has a bit of flex which can be fixed quite easily by carefully turning the adjustment screw. Review Step10 in this guide: MacBook Air 13" Mid 2013 Trackpad Replacement. That should fix it.

@xcelr8t - When the original battery was installed day one it was the exact same size as your new battery.

But! Over time as the battery is used gases buildup inside and the battery expands. In some cases the battery will expand so much it will split the system apart! Here we have a slightly distorted uppercase which is why the trackpad is loose.

Here's a bulging battery in a MacBook Air:

This is the difference between two batteries: 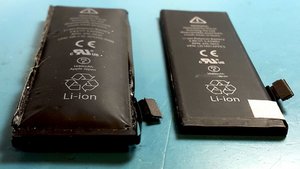 Thank you for taking the time to help me out.

I think the rattling noise is happening because the structure of the old battery that came with the mac air is different from that of the new battery sent by ifixit.

Thank you for your reply. It is really helpful.

You said that, "Over time as the battery is used gases buildup inside and the battery expands."

OK, I can't show you any better evidence than what I've shown you.

Place the batteries on a flat surface the old one will rock a bit. If that still doesn't prove it. Why don't you get a second new battery. If the second one is the same as the first replacement then you'll have the evidence there is something different between the old and the new. It doesn't take much pressure to bend things.

so did it ever stop after you replaced the trackpad? I’m having the exact same issues as you are =\