Won't turn on, is this corrosion on my logic board / is it fixable?

I will try to make this as clear and concise as possible, as I know troubleshooting with incomplete information can be frustrating. Basically my MBAir won't turn on anymore out of nowhere, no liquid spills or physical damage/drops ever. The "Observations" below are things that I noticed while troubleshooting and results of the "things I tried". 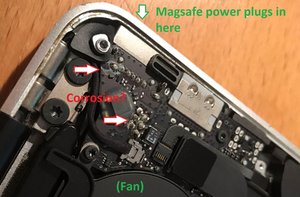 If there's anything else that I can provide that might help solve this problem, please let me know. Thanks in advance!

Remove and check the logic board for corrosion; the picture of the DC board is not showing corrosion, this is just residue from the solder flux where they solder the port and DC wire manually in factory.

thanks Reece... that’s reassuring to know. I will find a guide for removing the logic board and post back with my findings.

The zzz sound? Is it like a ticking sound? Because if that is the case, it might be that there is an IC detective.

If that is the case, you need to figure out which one and have it replaced. I’ve seen the exact same issue with some other mac’s.

Hi Rick thanks for posting. It isn’t a click sound, more like something rotating or spinning for a fraction of a second. Kind of like a rope start lawn mower only laptop sized. that’s the best way i can describe the sound without sounding bias towards a faulty fan.

Is the IC detective something I can troubleshoot or visually inspect for signs of fault?