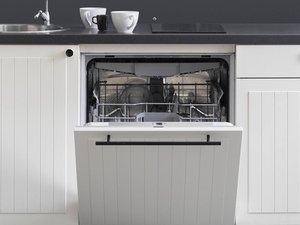 Can anyone suggest what this strange component is beneath the 28 pin DIL chip? It's on the controller board in an autofill counter top water boiler. I can't easily see the other side of the board but it doesn't look like there are any pipes going to it. 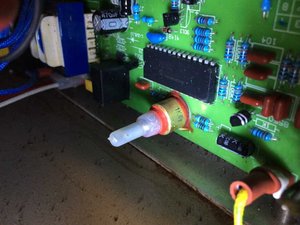 In fact it's not as @jayeff described at all. Here's a picture on the inside of the tank. There are 4 sensors you can see on the right. Two at the bottom are described in a parts list as thermistors, and the two at the top simply as "probes". On the basis of what they tell the control board, it:

The tip of the bent probe is at the maximum fill level, judging by the limescale marks on the tank. I assume it must sense the water electrically, either capacitively or conductively. The top probe must be what detects the steam once the water boils. (The heater is definitely turned off when the water boils, not when it reaches a set temperature.)

I think the pot which @oldturkey03 identified most likely sets the temperature at which the heater is turned on again after topping up or being left to stand.

The fault, in fact, was a failed resettable thermal cut-out mounted beneath the tank close to the element but the root cause isn't entirely clear. A rivet holding one of the spade terminals to the body of the cut-out was loose - possibly the electrical contact was poor due to oxidation or the rivet may never have been fitted tightly enough. Heat generated by the poor contact then degraded the plastic until the rivet was too loose to make contact at all. 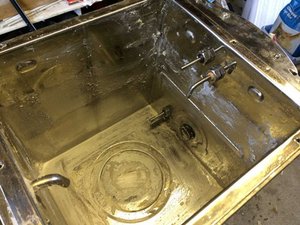 I've now reinstalled it and reconnected it to the water supply. How it works is interesting. On switching it on empty it first auto-filled with maybe just a litre or so of water and brought that to the boil. It then repeatedly added a bit more water and brought it back to the boil. In normal use it evidently tops up and reheats a little at a time as hot water is drawn off, so that the temperature never falls below a certain value, maybe 90 or 95 degrees.

@pleriche sure looks like some kind of potentiometer. Is it possible that this could be used to increase/decrease the temps? what exact equipment does it come out of? Any chance you can post a complete picture of the board?

@oldturkey03 Actually, you could be right there! It looks like a polythene cap on the spindle and you can maybe make out a thread between the spindle and the body. With bits of plastic tubing off to the left of the picture my mind went to plumbing. If you're right it must be some kind of factory calibration or set point that they don't want people to fiddle with, though I don't think it can be temperature since the boiling point of water is kind of a given (depending on your altitude, of course!) The 1K marking could well be 1kΩ.

It's an electric urn which we use at church for serving teas and coffees, or did until it went on the blink last week.

I was thinking of different temps for different applications etc. I was thinking along the lines of a electric water heater that can be set to different temperatures. 100deg C being the max of course. You wouldn't want to serve tea/coffee that hot. I think a test with a good multimeter to determine the ranges of the potentiometer might be on order. If you need any help with that check this great page https://therestartproject.org/wiki/How_t... as well! ;-)

In fact you can't make decent tea unless the water is boiling, and the thing describes itself as a "water boiler" so there's no question of setting different temperatures. Anyway, the boiling point of water varies with altitude (you can't make a decent cup of tea on a mountain) so I presume it detects it's ready by the steam, not the temperature as such, ad do all electric kettles. There are 2 or 3 sensors but the insulation (which I'd rather not disturb) makes it hard to see them - it would certainly seem likely that the pot is some kind of factory calibration or setting of one of them. Anyway, I'm awaiting a replacement for a resettable thermal cutout which was the primary reason it wasn't working.

@pleriche just out of curiosity, would you have a make and model on the boiler? I hear you about the altitude. At sea level, water boils at 212 °F. With each 500-feet increase in elevation, the boiling point of water is lowered by just under 1 °F. I always thought that the right temperature for coffee was between 91 deg C and 96 deg C ;-)

@oldturkey03 I believe you're right that coffee is best made with water a little less than boiling ("coffee boiled is coffee spoiled") but I've always understood that tea needs the water to be boiling.

It's a Buffalo 10L Autofill Counter Top Water Boiler model CF357. If you just Google for Buffalo CF357 I think you'll find it.