My iMac Shocked Me! Why and how do I fix it?

When I opened the device I immediately connected the Magic Keyboard to charge it. My foot was naked touching the bare ground. I felt an electric shock from the keyboard, I disconnected it and then touched the lighting cable end it to also give me a painful electric shock.

I first thought was to google the problem, I read that the problem would be caused by lack of grounding, my home doesn't have one. But, I already have a Mac Mini and a MacBook Air and when I touch them barefoot it doesn't shock me.

I contacted AppleCare, they asked me to return the device to the store to diagnose it.

I bought the device from a verified reseller as where I live we don't have an official Apple store. First the tech guy was saying that he doesn't feel anything and the device looks fine. I asked him to remove his shoes and touch the lighting cable then he felt it.

After 3 days the store contacted me that they diagnosed the device and sent report to Apple and they refused the case and explained it's relate to the atmosphere. I told him but I have an Mac Mini and MacBook Air and they don't shock me!

He commented that as long as the case hasn't been refused by Apple he can't do anything.

Does it ordinary for a brand new iMac 2017 to electrically shock me! Why other devices - connected to the same power source in the same atmosphere - doesn't shock me.

I am worried that a component touching the chassis and it would damage the device after a while.

Currently I am waiting AppleCare spoke person who are responsible for my case to verify what the store service center informed me.

Please advice, should I accept that?

Sadly, you'll need to get an electrician in to check/fix your house wiring as you do need a good grounded outlet. This sounds like a classic case of cross-wiring.

It's also possible the line cord is bad. There are cheap AC line testers available to verify the outlets wiring. I would start there

Lets look at this from an electrical wiring perspective we have a source (+) and a drain (-) which is also tied to the buildings ground. If the device is expecting a given blade (pin) within the power cord to be the + side then you plug it into the - side then you've cross-wired the device!

As the iMac case is grounded you now have a live case (+) so when you touch it and have your foot on a wet floor which is tied to ground (-) you'll get zapped! This is a case of bad power wiring.

So why does other devices not encounter this problem? Not all devices have their cases tied to the negative side of the cord (-) we call these cases double insulated as they have no exposed metal surfaces that are electrically active. A hair drier is a good example.

Even still it's the way you plugged the plug in that also makes a difference! Again, your iMac presently is cross-wired. If you flip the cord plug 180 degrees that should resolve it. But, you might not be able to!

Lets say you have a three prong grounded plug and the outlet is also designed to support the three prongs of the plug (but the ground connection is not connected as you stated). Then we can surmise the outlet is mis-wired! Here the brass screw has the White wire (common) when it should have the Black wire (hot). Here we can't rotate the plug 180 degrees to move the expected + of the plug to the + side of the outlet.

So is the fault the computer? No! It's your houses wiring that needs to be fixed. Make sure you get a proper outlet installed and make sure it's wired correctly! 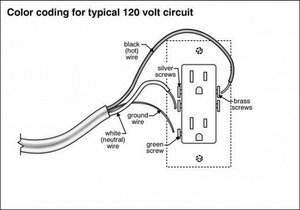 Thank you very much for taking time to reply to my question. I believe what you described maybe the source of the issue. I got a phone call from AppleCare representative today he on the other hand clarified that it's not a ordinary behaviour and re-opened my case and will processed with safety check.

Anyway I will keep updating you and this post may it be helpful for someone else and saves him/her time as my device will probably will spend 10-15 days in the services center till they finish the diagnosis.

I had a similar problem of receiving electric shocks from a brand new Imaq. As far as I know there is no software which can test why the computer gives out electric shocks?

@maryav I asked Apple for a full review for my brand new iMac to investigate why it is shocking me, unfortunately, according to their feedback, the is no issue in the device they claimed the issue from the wiring in my house case of cross-wiring as mentioned in the answer above.

unfortunately, I do not have the required equipment or the knowledge to follow the answer mentioned above so I dropped the matter after getting confirmation from Apple that the device is in good condition.

I wonder how Apple could claim your wiring is at fault without a qualified electrician confirming this. Did they actually carry out tests in your house. I have also had all the sockets tested in my house to ensure they are earthed. I have also checked with the National Grid. They said there were no power surges or groundwork issues on that day.

As far as I know there is no software test that exists which could test why a computer emits excessive electricity during a specific time period.

That leaves us with a hardware issue. Seems that the problem hasn't been fully addressed by A.

I have a imac late 2013 27” and always felt the buzz when i touch it. Now my imac suddenly is not starting anymore and i cant feel the buzz either, i bought a new power supply and still the same. The led #1 keep blinking but nothing happend. So let me tell you how much i missing that lil buzz :-(

The problem was my motherboard, i replace it and go on. Anway The micro electro shocking touching the case, come back.

Put on some sneakers.

does this earthed shock cause any damage to the device?

All metal cased Apple products do this. Nothing to do with house wiring. Wear rubber sole shoes and the problem goes away.

I have iMac mid 2011 although working perfect but i get the shock everytime I touch the key board or the body of imac. I got my wires checked & electrician declred them good. I tested with a tester & it gives out the light that current is leaking. My macbook pro 2017 also gives me shock. I think its something to do with 220V current countries (as it doesn't happens in US) but Apple should address this issue once for all. Apple's consumers live in every part of the world !

I found Apple very unhelpful. They didn’t seem to want to acknowledge the problem even though widely reported on Google.

do you have a similar (or can borrow one) power cable?

maybe the insulation is not that good.

as you already know these power cables are shielded so no electric shocks at all.

you, i think already know that, you can receive a similar shock touching plastic or some other objects, the electricity is coming from your body.

P.S. Anyway keep on addressing this with apple. If you can find among your friends that in any room there is no carpet, not cold so you can be barefooted and try the same.

@carlit - I think getting a cheap line tester is the safer way then to testing if you get shocked or not.

Thanks for your answer, I tried to test the device in my office [different location/power source/atmosphere] got the same result. I will keep following up with Apple to make sure that no energized part touch the chassis.

I would test it with a meter to see what the voltage is. You also could be encountering static electricity as well.

I had a similar problem with the IMAC I purchased in 2018. I tested my sockets, I checked for power surges with Nation Grid, checked electricity usage. The only equipment on in the room at the time was the IMAQ. As far as I know, there is no software which can go back in time to test why an electric shock occurred. Anyone else had this problem>

This seems to be a common issue people are having. Only difference, people are having shocks while holding their smartphones. This type of shock is mostly coming from the battery and wireless connection. Anytime i have wi fi running or high data usage then i typically recieve a minor shock in my fingers or in the palm of my hands.

The solution: wrap duck tape around the area where you feel the shocks coming from.

It can look tacky or neat depending on your wrap job lol.

You should be able to use a computer in the normal way and not get shocked. Plus there is no warning when you purchase the computer that you should get your wiring checked. If this is the issue the company should state this.