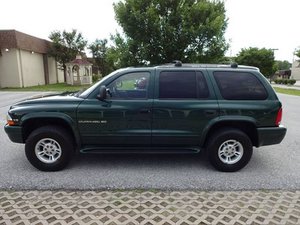 The Durango was marketed as a sturdy truck-based SUV designed to hold up to seven passengers and tow up to 7,500 lb (3,400 kg) when properly equipped.

the bushings went out on my linkage. I orderd new ones. my question is does the shifter cover on the floor have anything to do with the transfer case engaging into the different 4x4 selections? does that connect to transfer case just to light up or for the performance of the transfercase?

I have a 2002 Dodge Durango, and there is a Electronic Switch in the dash to engage the Four Wheel Drive. Now, I had a 2001 Dodge Ram 1500 also and into engage the Four Wheel Drive in that, there was a shifter on the Floor. Now, as far as I have been able to tell both my Durango and Ram were the 5.9L Magnum (Same motor) and the Chassy/Transmission of the Durango were the same as a Dakota. On my Ram, yes it connected. On a Durango, I would think so?