Hey ! So i was changing the chassis of my iphone 6 the other day and when i finished and plugged it in the charger without screwing the lcd shield it worked for a bit but then phone turned pretty hot and the screen went yellow..

I know i messed up 2 of the screws..the one just above the right upper corner of the lcd shield and the second of the top left side of the motherboard..

Now the phone is shorted and dead and everytime i put the charger in it turns burning hot..these two screw brackets do not short to ground but after removing the brackets no damage is visible. 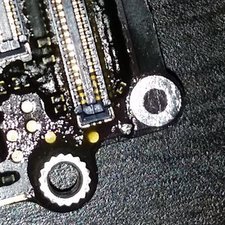 anyone has thoughts as of what might be shorting and how to fix this?

after i apply the freeze spray the cpu instantly heats up and all the elements above..is it possible that the cpu is shorted ?

where does it get hot

i guess on the pm ic or somewhere close

from the photo there doesnt seem to be to much damage to the screw holes, you could put isopropyl or freeze spray on the board to locate the source of the heat. if the pmic is heating up it doesnt mean to say its the problem. try isopropyl and and power and it will give you an area to check for bad components

theres quite a few vcc main components around that area, just out of curiosity, was it a pre assembled lcd with camera and sensor etc already attached

Are you doing that you put a long screw in one of the shorter screw holes?

Are one of the screw holes on the logic board near the screen connectors broken off?

I'm pretty sure the phone has long screw damage and can only be repaired by someone that does microsoldering.

Are you testing the short where the 2 arrows are pointing? If it is shorted there, look at everything in red to find the shorted component. The pad on PMIC is surrounded with ground pads. 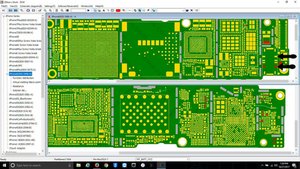 thank you very much! i found a shorted cap but it doesnt heat up instantly or first with the freeze spray is it possible?