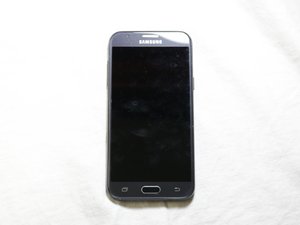 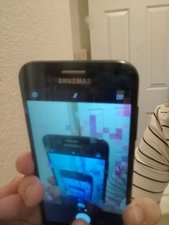 This is a roughly new phone and shouldn't be having problems. I got it a few months ago and it just started doing this about 2 hours ago. I had been walking and had my phone in my pants. It was not in a pocket but the screen was against my stomach. I have been listening to music and it suddenly shut off I take out my phone to see what had caused the music to stop. Across my screen was three sets of purple squares they didn't take up much of the screen and it first I just thought my phone was overheating. I took out the battery and let it sit for 15 minutes and continued on my walk. I put the battery back in and turned on my phone to realize that the problem had gotten worse. Now there was horizontal lines going across the screen. I had tried to get in contact with my father since he is a techie guy but as I was typing the screen glitch and hit another key. At fault at first I thought this was a virus and I had tried to guess where or what could have given me a virus and I could not come up with anything. I got home wrote down all the phone numbers that I had in my contacts and reset my phone to factory reset. I then turn on the phone waiting for go away in the problem continue getting worse in so now instead of 3 lines on the screen and purple squares it was three lines horizontal and vertical red or white lines across the screen and more purple squares along the left side of the phone. now I'm looking at my screen as I use the voice to text feature because I cannot access half the keyboard my screen is flickering and will randomly Jump Around purple squares are flickering and very in Shades what do I do my screen is partially broken due to somebody pushing me but it is very minor and not a wide crack. What could of suddenly cause this it was fine and then within a span of 15 minutes my screen became messed up. What could have happened and how do I fix this.

@queenelizae totally agree with @jimfixer on this , Sound slike you have a bad LCD. Post some images of what your screen displays so we can see what you see. Use this guide Agregar imágenes a una pregunta existente for that.

@oldturkey03 I added one to the front. The crack happened last week, so would it still matter..

How would I go about doing that? When I take off the back I only have access to the battery and SD card

If the phone is this new you should probably take it in under warranty. If you start to screw around with it it could void any warranty there may be on it . You should check your service contract for screen replacement . some service providers do have damage warranties for a fee. If you have no such luck then you need to replace your screen You should have opened with this line "what do I do my screen is partially broken due to somebody pushing me but it is very minor and not a wide crack" the rest was a distraction . The screen is broken and needs to be replaced This video shows how to replace the screen . you will need to replace the LCD not just digitizer and glass. Complete screen assemblies can be found on eBay and Amazon Hope this helps