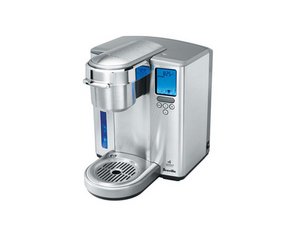 Why does water continuously run through the brewing head?

Water runs through the brewing head until the tank is empty, it does not shut off after a cup is brewed. A valve problem, where?

Is the water flowing through under power, or is it just leaking through?

We've got some pretty thorough disassembly guides. If it's pumping the water, then you've probably got an electronics problem.

Otherwise, it may simply be a bad valve like you suggest. Pull it apart and take a look!

Well, @kyle is in the ballpark, now it’s time to order some popcorn and crackerjacks.

@m.d.decker, your pump is running constantly.

A pump that is always on, or never on, depending on the machine, is usually a failed water level probe, reed switch, or sensor. When a probe, sensor or switch fails, it can be in open or closed state or it can just not be able to detect the correct condition, such as water level in the boiler in preparation for a next cup.

This could also be interference with a probe/switch/sensor, a defective or ineffective (due to mineral build up or running it without water or ignoring a “descale” indicator message for example) water level probe is the more likely point needing inspection.

As well, as another way of looking at this, Keurigs (such as the BKC600/700XL models) follow an algorithm of filling the boiler somewhat in preparation the next cup. It does this by:

After all this, if the water level probe has done its job and shut off the water pump, a process will begin whereupon other valves are opened by application of a 12 V signal and only then will the boiler be activated to push the temperature up the PID controlled temperature as designated in the digital menu on the machine. Once that temperature is reached the BKC600/700XL models will indicate on the screen that it is ready to brew. If you don’t get the hot water, the algorithm/process never reached the point where the boiler was activated, a state dependent on the water level probe detecting the water level correctly and first turning off the water pump . . . something that apparently is not happening if water flow from your machine is trying to force you to build an Ark.

So there’s your most likely problem then . . . a faulty water level probe. This could be caused by a bunch of things, but scale/mineral buildup is the likely culprit. You are going to have to take advantage of your on off switches/plugins and careful timing. Try this:

Good luck! Report back for all to see for future fixes if it works.