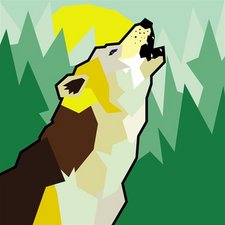 So I'm helping my neighbor, who is haveing some family problems... dont ask... and has 2 routers in the house, one connected to the other but are separated by nat, and they have this brother printer that has built in AirPrint stuff, that works great and is connected to the first router, an Apple router (or first router off the Internet) but the owner of the second router, an asus RT N66U, has made a "deal" with the printers owner that he gets to use it if he pays for the ink, but he refuses to use his network (the first network) and they asked me if there was an easy fix to make it show up on both networks, so i had the thought of having the wireless on the printer connected to the first network and have the USB connection to the second network.

The wireless still works flawlessly but the USB connection on the second network is printing strange through the asus printer server service. If its one page like the windows test page it works fine but if its 2+ single or double sided it will print about 3/8 of the 1st page halfway through a line and then it will print the other 5/8 on another page and the second or more pages would not be printed... so i have only the first page split amongst 2 pages.

So can anyone tell me whats gone wrong?

Is there a better way to do this?