I have an old 2006 iMac (A1174; EMC 2105), it hasn't really been used since 2010 because it was having several issues mostly shutting down with no warning. I knew the issue was the power supply so I thought it would be a fun project to replace it. After putting the display on i plugged it in to test the Computer, it starts up but with a blank display, I hear the ODD spinning and the LED indicator under the right speaker lights up, 2 seconds later the HDD fan starts spinning at full speed (Note: there is no Hard Drive connected and i don't believe the sensor is either, so i think that is normal) the ODD fan spins as well. I went back to make sure everything was connected but still nothing. I read online that there are diagnostic LEDs but i cannot find them on this model. I think the problem might be the Logic Board (Because no boot Chime) but i don't know if it could be the display, GPU, Inverter or a broken cable.

I Would like to know where the Diagnostic LEDs are located (i checked to the right of the RAM slots and there is a silver connecter but no LEDs). 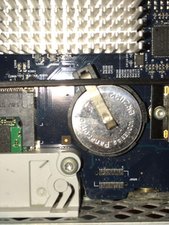 I figured out That the problem was the RAM I installed new RAM from another computer i found and it booted perfectly.

You may want to delete one of your accounts. We don't favor having two accounts here, as some people like to upvote their own answers. You can ask ifixit to do that:

@blangstile due to new inforamtion I've made adjustment to the answer. Looks like your compuiter is an early 2006. Those did not yet have diagnostic LED's

No Video, No Boot Chime, White LED ON (Symptom 1)

The iMac (Early 2006) will turn on (indicated by the front LED ON), but there is NO boot chime and No Video on the display. The faint sound of the fans, hard drive, and optical drive may also be heard.

From the Apple menu, choose Shut Down (or if the computer is not responding, hold

the power button until it turns off).

Unplug all cables from the computer, including the power cord and any display cables.

Plug the power cord back in, making sure the power button is not being pressed at the

same time. Then reconnect your keyboard and mouse to the computer.

Press the power button on the back of the computer to start up your computer.

Does the computer display video after successfully resetting the SMC?

No: Continue to next step.

It may be necessary to install known good memory for testing purposes and replace any unsupported or defective SO-DIMM’s identified during this process.

Does the computer display video after verifying and/or replacing the memory with known good memory?

No: Replace the logic board.

Don't replace the logic board yet :-) this is the sequence to check according to Apple :-)

That is what it looks like on my computer where the LEDs should be. (imgur Link)

Do you have any guess as to what the issue is since i cannot locate these LEDs?

Is it possible the RAM is installed incorrectly?

@blangstile looks like yours is an early 2006 and those did not have the diagnostic LED's. I made adjustments to my answer. Yes, it is possible that this is a SDRAM issue.

So what are the possible things that could be broken out of the ram, cpu, inverter, display, Logic Board, etc. (knowing there is no Start Up Chime)

There really are no usual things. That is way the trouble shooting is so important. RAM CPU and logicboard are the big contenders....

With no HDD installed that is normal fan behavior. Try putting the hdd and sensor back and see if makes a difference. Also, try taking everything out and putting it back in. You might be shorting something or something could be pinched.

Have a similar problem with A1207, without LED panel led 3 no light but external monitor good and show "?" because HDD its new. When put LCD panel led 3 its light, but no chime and black screen.