A few months ago my iphone 5s' battery capacity was getting very low, so I bought a new one and tried to replace it. I've done this before to I thought I new what I was doing. Obviously I didn't because doing so caused a problem with my LCD digitizer. When I turned on my phone the screen would be unresponsive and show the effect in the picture below. 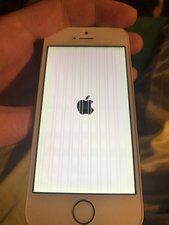 I tried to fix it for a day or two by fiddling with it, assuming it was just seated in the socket wrong, but with no luck I gave up and upgraded my iphone as I had an upgrade anyway. When I was waiting for my new phone to deliver in the mail I continued to mess with it and managed for the screen to return to it's original condition. So I put everything back in place and used it until I got my new phone. when I did this I didn't plug the home button in, and using apple's software based home button got tedious so I tried to plug it back in, but doing so resulted in the LCD digitizer to come unplugged. Fast forward to today and I still haven't managed find that sweet spot that it was plugged in before. And now whenever the LCD digitizer is plugged in the screen completely turns black instead of just not functioning. If I plug it in slightly (by pressing the cord agianst the socket, but not hard enough for it to clip in) the colors of the screen start to turn into solid, glitchy colors( as shown in the second picture) 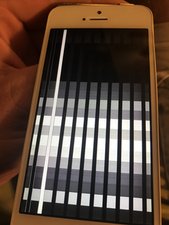 I'd appreciate any help on getting my iPhone back into it's original form, thanks :)

Hey sorry to hear about your display issues. Hopefully it's gotten resolved this far. Based on the image it seems like the display is now damaged so a new one should fix the issue. Sometimes when I have the screens go black when plugging them in on the 5s it can be a proximity sensor issue so replacing that has had some results in the past. But I would start with a new display first. Best of luck!