Can anyone tell me what the connector on the short cable is called that connects the Mac Pro 4,1's mainboard to the bluetooth module to deliver the USB signal (mainboard side)? And which two of the four pins hold the USB signal? Is this a common type of connector or an Apple custom thing?

I'd like to replace the Wifi module with a newer Wifi / BT LE module from an iMac, and it needs a USB signal, which I should be able to get from the original bluetooth module connector. But I don't want to destroy the original cable. 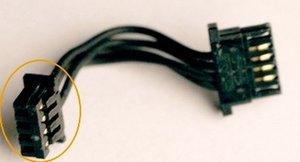 In case anybody is ever interested, the connector is called JST GH.

Could you post a photo where we can actually see that end?

The photo is in the first post. Or do you mean the connector on the mainboard?

Shouldn't you just need a 3rd party WiFi/BT card that is compatible with the Mac Pro? Then you could just use this guide: http://meanderingpassage.com/2007/07/18/...

You know I looked at this question a couple of weeks ago and it didn't make sense to me. That bluetooth is built into the airport card that goes into the slot on the logic board and that cable threw me off.

Here's the part you need:

That cable looks like a power cable for a PCI video card.

@danj knows more about the airport bluetooth upgrades than I do, let's see if he will chime in as to which one to install.

The link no longer works, any chance you can provide what the connector is called?

The article you link to, then links to cables that will supposedly work for sale on eBay, unfortunately, the vendor is all out of the 4-pin cables. I have searched for these online to no avail. I wound up ordering what is suppose to work, some JST 4 pin GH connectors but they have an extra bit of plastic on them and will not fit, I've tried to file the extra plastic off, but then when you do this, it winds up breaking then the wires run free. The connector is really nothing like the one that came out of the mac. I've now purchased the JST GH connectors from 3 different vendors online and nothing so far seems to fit or work. Surely someone knows what that plug is called so one can do a google search for it and find it. It does not seem to be the JST GH connector as others have stated.

As I said in an earlier answer, the connector is called JST GH, so the problem is solved for me.

To elaborate on the original problem:

The available AirPort cards for the Mac Pro don't support 802.11ac, and the Bluetooth modules don't support BT LE, which means they are also incompatible with macOS' handoff features.

The solution is to replace the original AirPort card with a combined Airport/BT card from an iMac via an additional adapter. The original BT connector on the Mac Pro will stay empty, but on the Mac Pro 4,1 / 5,1 you need to deliver an USB signal to the adapter. If you don't want to route a cable from an external USB port back to the inside or have an internal USB port on a PCIe card, you can use the original BT connector on the mainboard to provide the USB signal via a selfmade cable.

Since I didn't want to destroy the original cable, I was looking for the name of the connector for the new cable.

I ordered a 4 pin JST GH connector cable for my 4,1 mac pro, it was not wide enough, it seems you can only find 1.25mm which is what I bought, but too small. can you provide anything more specific on what is needed to connect to the motherboard or logic board?

I found this is a MacPro upgrade group on a different platform:

The USB header on the logic board uses a Molex PicoBlade connector.