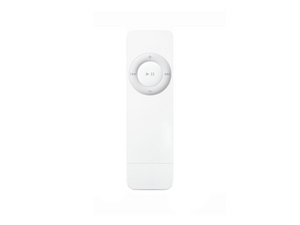 How to use the controls?

I was given this shuffle It does have one (awful) album that plays on it. I plugged it into my PC to charge it (I hope I did it correctly)

Whilst it was plugged into the USB I opened the file up & it showed a huge list of music (which played on my PC) The music (album) that plays on the shuffle doesn't show up on my PC (or I'd attempt to delete it!) The nice music that shows up & plays on mt PC doesn't play on the shuffle. I played every song attempting to find the horrible music that does play, but it is not in that list. Obviously I do not have any manual, nor can I find one to help me figure this out. Any clues as to where I can find this info?

I would also recommend saving the songs on your computer before you go through those to be sure not to lose them.