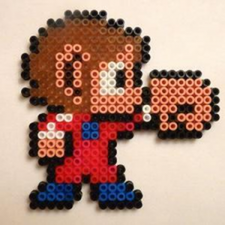 Need some help please! I woke up one morning recently to find my iMac was dead to any input. It was working fine the night before, I didn't shut down and just let it go to sleep on it's own. There is zero response when the power button is pressed, no boot chime, no screen response, no fans/hard drives spin… nothing.

What I've tried so far:

There is only one diagnostic led lit on the logic board (labelled LED601) when the iMac is plugged in: 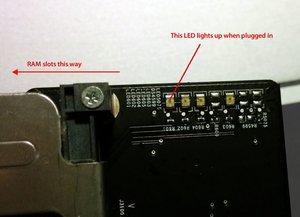 There are 4 LEDs in total and it's the led furthest from the board edge that lights up. Strangely the service manual for this model seems to list the LEDS in an opposite order to my board: 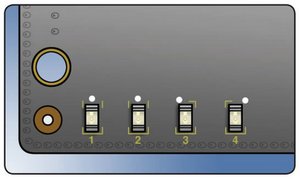 I assume the LED that is lit up must be LED 1? ( indicating that trickle voltage from the power supply has been detected by the logic board).

Does this mean that it's most likely a logic board fail? why would the logic board suddenly fail overnight when iMac was sleeping?

Hello everyone. Just wanted to post what worked for me. I went through all the official mac steps, nothing worked. Dug deeper and found a "fix it yourself" step by step. It suggested pulling the RAM and then try starting the computer. This worked- The fans came on and the mac steadily beeped (indicating 'no RAM'). Now, one by one I replaced the 4 chips and started it up expecting to find a bad one that was causing my original problem. All 4 are back in and the mac is running just fine!?!? I hope this solution finds you. :0)

@rudenator: YOU SAVED MY DAY (see below)

I had exactly the same scenario listed above. A dead iMac, unresponsive to the on/off switch. Switched out all the cables etc with no fix.

I can confirm that removing the Ram boards (easy to do - just unscrew the bottom compartment) - pulled them all out - put them all back in - and hey presto - it worked.

YOUR SUGGESTION WORKED -- with some slight variations.

- VARIATION: no beeping at startup.

After removing all the RAM and turning on the iMac, it didn't beep or make any noise. I then powered it off then added one memory module (in the top slot) and the iMac started up fine. Hurray!

- VARIATION: slot 4 never worked again with any of the 4 memory modules. Adding memory modules back one at a time and rebooting between each work fine (from top to bottom) until slot 4 (bottom) was occupied. All memory modules worked in slots 1 & 3 (top and third from top) so memory was ok.

- VARIATION: slot 2 (second from top) showed empty macOS's "About This Mac," "Memory" view even though it was occupied (tried 3 different modules here with same result). This iMac might require paired memory module installations since lots of computers have over the years, so with slot 4 empty this iMac might treat slot 2 as empty even when occupied. But occupying slot 2 didn't prevent iMac from booting as did occupying slot4.

Worked for me. You have made a friend for life!

I did that already, and it had no effect.

Check the source of where that power supply came from. Sounds bad to me.

The "suddenly won't turn on" thing happened 2 times before throughout the years (I have it since late 2009...), so every time service would't find anything better than replacing the motherboard - which is f***ing expensive.

So I tried this time what @rudenator suggested, and YES !

In detail, all 4 memory slots were taken. Since some time, I had a doubt about it, as system diagnosis showed up only two ram in place. But so far the iMac worked fine, and I omitted to check physically if I was crazy or if the 2 ram had disappeared somehow.

In reality, the two "missing" memory bars seemed to be broken, and yes, they were still in place, they simply didn't show up. These two were in the BOTTOM emplacement. I took them out, as I guessed they were defective since a while.

Next I tried the two remaining individually in the TOP emplacement (relative to the screen which is top). This, because after Apple a single ram can work in the TOP place, but not in the bottom, at least for this model.

THE iMAC REBOOTED with one of them !

Next, I checked them all individually, and in fact even one of the former bottom ram still worked. YES.

I explain myself what happened, by the fact that if you pair a working with a non- working ram diagnosis thinks they are broken both, so if they are in bottom the machine don't shows them, and in top the machine won't boot.

I dont know, but maybe this trying saved me from a new motherboard...(which I wouldn't have paid, as the iMac is 8 years old now), but at least it saved me from buying new ram.

What I tried so far:

- replaced ram, also one by one and couple by couple, also tried to power on without any module

- replaced inverter board with known good one

- reset SMC (and no, I can’t reset PRAM as long as it doesn’t power on)

First led is on, all others don’t light up, fans are not spinning, dvd doesn’t make any sound, no chime: still dead.

Owner told me it was extremely hot on the backside when she last switched it off. Next morning it was dead. When I opened it, it was full of dust: fans, heatsinks clogged, dust everywhere.

I’m opened to any further hint, fearing a failure of the motherboard, maybe CPU.

I had the same problem with a late 2009 27 inch imac, thought my display died. After reading this i removed the memory, and placed them back in, and it worked again! Thanks!

Grey screen, 3 beeps, the grey screen 1 beep, then completely dead not even the sound of the fan starting up. AND THEN.... Just before heading to bed last night I tied again Firstly removing both ram (2x2gb) tried rebooting and although no startup chime I did get a grey screen with the message of 'computer had to shut down previously'. I pushed in one of the ram and the imac (2008 with ssd upgrade) started. I then restarted with both sets of ram and got the grey screen 3 beeps (bad ram from what Ive read here) I then took out the ram that worked and tied rebooting with the one that didn't, grey screen again. So I put the bad RAM to the side and tried restarting twice by placing the good RAM in both slots alternately to make sure it was the ram and not the slots. Once satisfied it was the faulty RAM I ordered a replacement 2gb ram on eBay for £7 which should arrive in the next day or two.

Got up this morning and imac still working fine on the single 2gb.  So after that long waffle I'd say.. simply keep going at it no matter how pointless it seems and you may be lucky.

Ps I forget to mention that when the computer was really dead I was trying numerous keyboard shortcuts and although there was no start up chime it was while holding down the shift key while continually hitting the startup button that got me over the first hurdle.

Early 2009 24” iMac 10.9.5 still working beautifully as a platform for Firefox one minute as I walked away from it and completely dead the next when I returned with a coffee.

Unplug, RAM out, vacuum the dust out, plug in to test: beeps and smiles all round.

Unplug, RAM back in, plug and boot: as good as new.

Thanks for the wisdom!