Missing capacitor needs to be replaced

Hello my name is Sgt John P. Sunga - USMC. I recently acquired an early 2009 MacBook Pro 17". It was not booting up. After breakdown and cleanup and applying new thermal paste, I discovered one side of a tiny small capacitor broken off. When lined up proper, it boots up and everything works great. The caps was just barely hanging on and finally broke off. There are no markings on the caps but I took a picture of Where it is located. If anyone out there knows what type of cap and where to get it, that would be greatly appreciated. 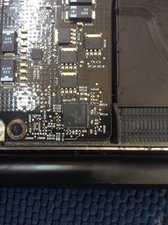 The cap is located on the immediate left of resistor R7120. Below the missing cap looks like two identical caps that are mounted vertically.

SgtJohnPSunga, thank you. The part that is missing is C7196 which is a 0.1UF 16V 10% capacitor in a 402 package. Available right here as well as many other places. 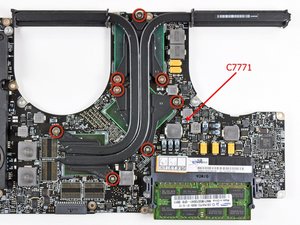 Thanks so much.m I didn't expect an a response this quickly, this really helps me out. Thanks again.

While this is open, since you are already soldering, replace C7771. Its time to die is coming.

I'll go ahead and replace this as well. Is this the same cap?